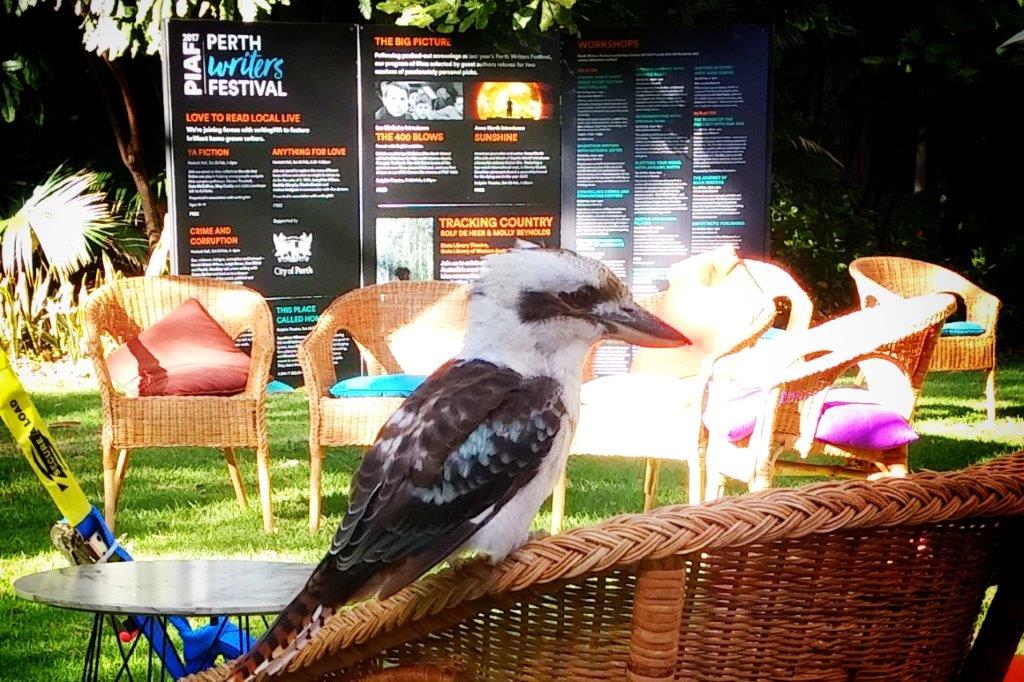 Last year, I was a first-time guest of the Perth Writers Festival, with the excitement of a newly published book. This year I attended with doubts and questions, focused more on my shortcomings than on any progress I’ve made with my current work-in-progress.

At its core is the story of one man’s life, a complex story of survival and courage and resilience, of incarceration and injustice and a search for home. Although I’ve written about 90,000 words, it’s really a multitude of fragments without the fine detail needed to transform a series of incidents into a narrative others might actually want to read.

Lately, the project’s been throwing up more questions than answers. Questions about how best to tell the story I’ve immersed myself in for the past three years. Questions of whether my ability to finish is a failing on my part or some external factor. Questions about how other writers have tackled ‘true’ stories where there are huge gaps in the information available to them.

So, I headed off to this year’s Perth Writers Festival hoping to find some answers.

I confess I  had no idea who Ben Rawlence was prior to hearing him speak, but I am so glad PWF Program Manager, Katherine Dorrington, invited him to give the Opening Address. Ben Rawlence spoke about his time in Dadaab, the world’s largest refugee camp with half a million inhabitants, and ‘introduced’ us to several of the people whose stories are included in his book, City of Thorns. I’m sure others were as enthralled as I was, offering a demonstration of the power of both the stories and the storyteller.

Listening as a writer: I bought City of Thorns because I’m interested in giving a human face to a subject we often hear and see as little more than statistics and stock images. I also want to find out how Rawlence tells the stories of multiple subjects and the ways in which he connects these lives.

Maps of the Heart: Kim Mahood and Malachy Tallack

Kim Mahood (Position Doubtful: Mapping Landscapes and Memories) spoke about her attachment to a place from childhood, and being at the interface between Aboriginal and white Australia. She’s found using maps to be a unifying tool – a way to find common ground and a starting point for artistic collaboration.

Malachy Tallack’s book 60 Degrees began as a travel book but he was unable to separate his own baggage and relationship with home. Un-Discovered Islands is an exploration of islands that were once thought to exist but later found to be the product of imagination, deception or human error. Tallack suggested that people map the places they know, but also the ‘spaces beyond the imagination’.

Listening as a writer: My subject has lived in and travelled through many countries. In what ways might the notion of maps become a motif or metaphor with which to explore notions of place, home, belonging and freedom?

I only attended this session at the last moment, yet it became one of my festival favourites. Armando Lucas Correa’s ‘obsession’ with the St Louis began in 2003, at which point he began collecting everything he could on the subject; he didn’t write the final chapter of The German Girl until 2009. 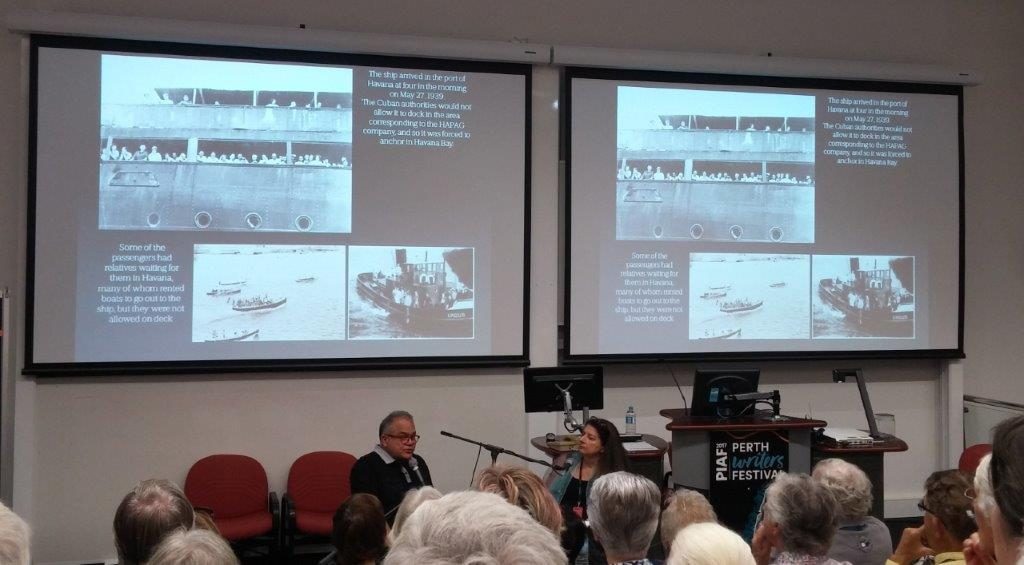 Correa wanted to ‘write about the past in a way that was connected to the present’. He added that nothing has changed; we are treating the Syrians in similar ways to those aboard the St Louis, including using the same language to describe them. The German Girl is a work of fiction and invented characters; however, the second chapter is as close as possible to the reality of life on the St Louis. So, why fiction? Correa says there was already a lot of non-fiction about the St Louis, but he wanted to convey the feeling of it – to give a ‘greater emotional connection for the reader’.

Listening as a Writer: I’ve been experimenting with writing my current project as fiction, and Correa’s comments are encouragement that perhaps there is merit to this approach, with the potential to reach a different group of readers by writing this particular story as a novel.

Lee Zachariah (Double Dissolution), Elspeth Muir (Wasted) and Mie Fong (One Child) have all written books that include their personal stories alongside larger issues.

Elspeth Muir uses her very personal story of losing her brother in an alcohol-related incident to frame a larger discussion about the drinking culture in Australia. She found that in being person and extremely honest, ‘people find the space to do that with you’. She also said, ‘Statistics don’t show what happens to family and the grief – that [the personal story]’s how people are able to understand the effect and have an emotional response’.

Lee Zachariah covered the 2016 Australian Federal election at the same time his marriage broke down. He hadn’t initially planned to include the personal , but his editor asked him to, believing it would draw readers in.

Mei Fong wanted her book One Child to be told to a general audience, not an academic one, and so included a lot of personal stories of those impacted by the one child policy in China. She added that journalists don’t usually insert themselves into the story, but part of hers is about having a miscarriage and fertility treatment, and felt these experiences, still with a great taboo surrounding them, were relevant. In fact, most people responded well to the personal; however, it’s a balancing act between not enough self and too much.

Listening as a writer: I wanted to find out how and why these authors included their personal story alongside a broader one. Is including my own story and friendship with my subject a legitimate way to tell his story – or would leaving myself out of it offer him greater agency? And can it be used to explore a broader issue?

In Mazin Grace, Dylan Coleman has written her mother’s story about growing up on a mission near Ceduna in South Australia, while Sarah Drummond’s The Sound is a fictional version of the sealers on Breaksea Island off Albany.

Although Coleman’s book does contain some changed names, and written in a fictional format, it is essentially non-fiction. Her mother wanted the reader to see the story through her eyes, to show how she felt and the language she spoke.

Sarah Drummond chose fiction because she wanted to contextualise historical characters. She wanted readers to know who they were, but found it too difficult to make them accessible through non-fiction; there were no written records of the sealers and she wanted to ‘drill down’ to find their stories.

Listening as a Writer: Will fiction or non-fiction enable my protagonist to be most accessible to readers?

Deng Adut was thoroughly engaging – and received a standing ovation at the end of his session – yet he initially struggled with the idea his story was even worth telling.

Songs of a War Boy took several years to write, and a great deal of trust. Deng Adut chose Ben Mckelvey to help him write it because he needed someone capable of traveling to Sudan with him. The two of them were methodical in working through the events of Adut’s life. He had regular nightmares going over his story, but felt it was his duty to be graphic to prevent it happening to others. Adut and Mckelvey met regularly to write, and at times, Adut would record himself and send these to Mckelvey to transcribe. Once drafted, they would read through everything to make sure nothing was missed; accuracy was important.

Listening as a Writer: I’ve been feeling a failure for not having a completed manuscript, but the reality is including sufficient detail and depth requires a great deal of time, and unlimited access to the subject. Without going into the nitty gritty here, this is currently problematic. 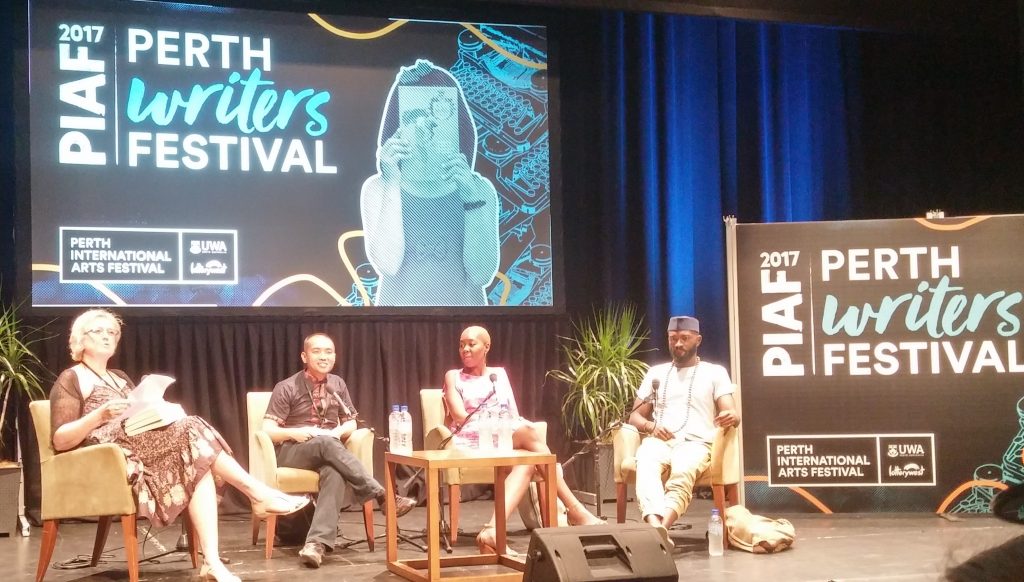 Sisonke Msimang says that home is South Africa. Geography is very important to her; however, she also said that she is ‘from the country but from no place’. For Inua Ellam, ‘home is the friends I have and the spaces between the conversations.’ What’s important to him is the interpersonal relationships rather than the geographical location. Agustinus Wibowo, whose ancestors were Chinese but was born in Indonesia, felt a foreigner in both countries. He spent four years traveling overland from Beijing to South Africa and decided that ‘home is not about place; it’s a state of mind’.

Listening as a writer: What does home mean to my subject who has travelled through and lived in numerous cities and countries across the globe? How might this be explored through the telling of his story?

I’m not sure the 2017 Perth Writers Festival brought me any closer to knowing the best way to tell my current story. There’s probably no one right way to write it; both fiction and non-fiction (and even poetry) offer ways to convey its emotional truth. For now, I will continue experimenting: a novel in which one of the protagonists draws on my friend’s experiences, but where I can fill in the gaps in the absence of necessary detail. I will also slowly move forward with ghost-writing his story, in a way that honours his experiences and the way he wants to tell it. What is crucial, regardless of my narrative approach, is to continue writing with care, compassion and collaboration.

What questions do you have about your writing (or reading) process?

If you were at the Perth Writers Festival, which sessions spoke most to you?

Previous 13 Writing Competitions for Young Writers in Australia: February to June 2017
Next 6 Degrees of Separation: From Room to The Toymaker