A Time to Remember: 70 years of the War Widows’ Guild in Western Australia 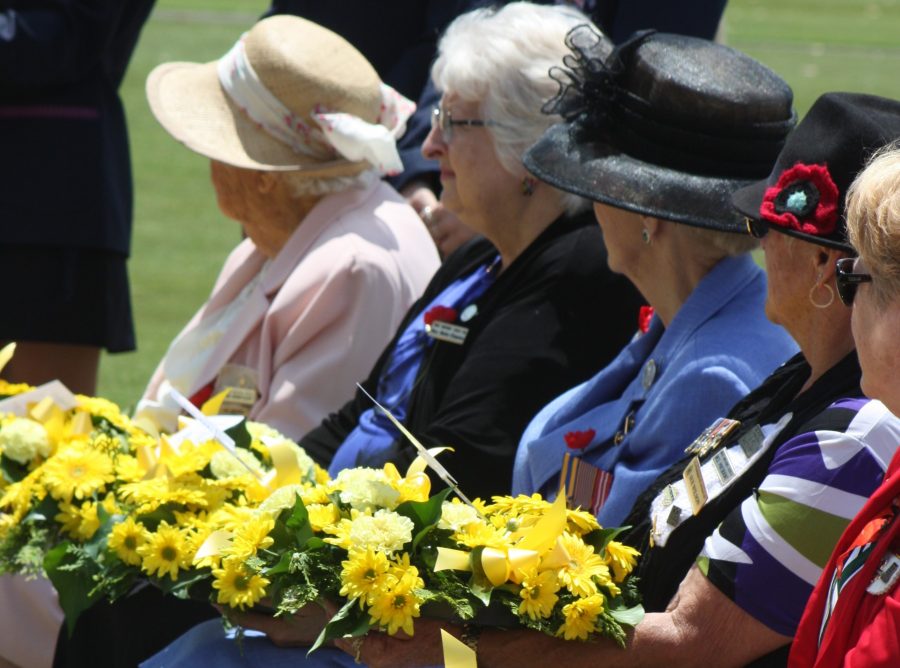 If you wandered through Kings Park on Monday 21 November, you may have noticed a large group gathered around the Flame of Remembrance. Perhaps you even wondered what the occasion was, since Remembrance Day has come and gone. It’s likely you didn’t know that most of those present were war widows, although the Governor of Western Australia, Her Excellency the Honourable Kerry Sanderson AC, and representatives of the armed forces and other ex-service organisations were also in attendance. 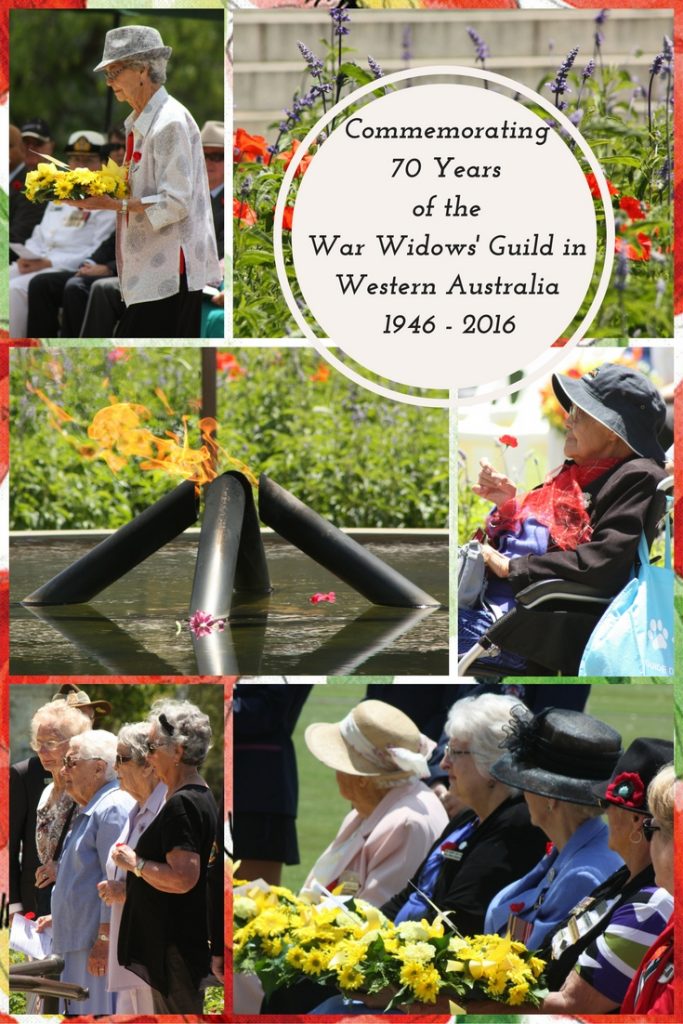 The annual service, held each November, rarely receives media coverage, but it is deeply moving nonetheless. Those present pause to remember the courage and determination of the women who laid the foundation of the War Widows’ Guild, the ongoing work of the organisation, and the war service of loved ones.

This year is particularly significant, as it marks 70 years since the War Widows’ Guild formed in Western Australia.

On Wednesday 27 November 1946,  about 200 war widows gathered at Anzac House, the RSL headquarters in Perth, to listen to the incomparable Jessie Vasey, who had founded the organisation in Victoria 12 months before.

Jessie Vasey was the widow of Major General George Alan Vasey, who’d been killed in a plane crash en route to New Guinea in March 1945. Together, the couple had been concerned about the plight of war widows long before she joined their ranks. She was frustrated and disheartened at what she perceived to be a lack of care from the wider community and he encouraged her to ‘look after the war widows because the bloody government won’t’. After his death, Mrs Vasey set out to realise her dream of a national organisation which would bring war widows together and become a ‘power in the land’.

On Friday 29 November, two days after that initial meeting at Anzac House, a small group of women met to form a provisional committee and officially establish a branch of the Guild in Western Australia. Many of the women mentioned in the minutes worked hard for the benefit of other war widows for years to come. 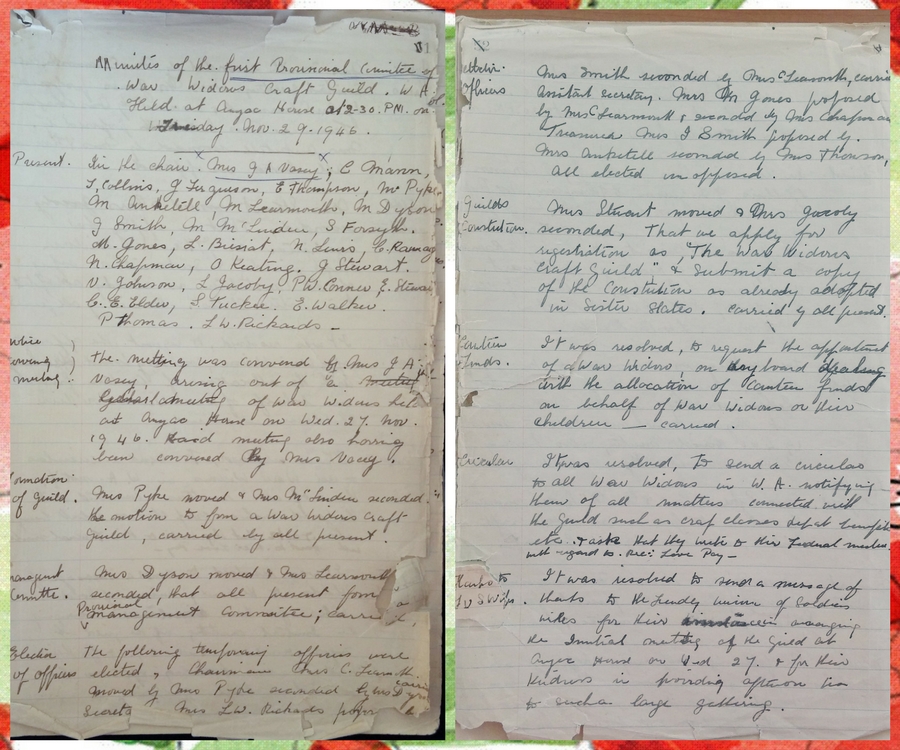 Some of their stories appear in Many Hearts, One Voice, but others remain largely unknown. In some cases, I don’t even know their first name. If you recognise any of those listed below, I’d love to hear from you. My book may be published, but there’s always room for one more story to be told. 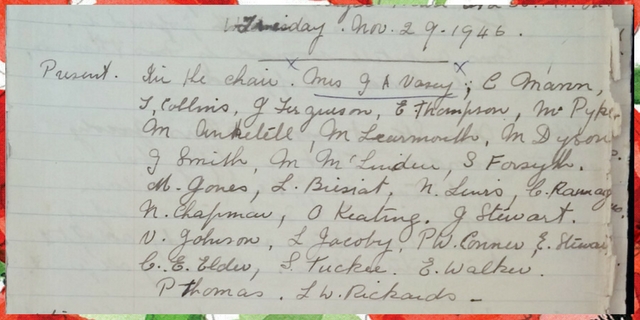 They also fought for public recognition and expression of their loss, campaigning for official representation at commemorative services as early as 1948. Jessie Vasey felt strongly that war widows should be viewed as ‘chief mourners’, but it wasn’t until 1956, and only after repeated ‘badgering’, that the national president of the War Widows’ Guild was invited to lay a wreath during the Anzac Day service at the Australian War Memorial in Canberra. In Western Australia the honour came some years later, although it’s unclear as to exactly when this occurred.

In her speech at this year’s War Widows’ Guild service, current State President, Mrs Jan McLeod, acknowledged the work of both past and present members. ‘Together we have fought for recognition, public acceptance of our lost ones, for subsidised health care and affordable housing.’

She added, ‘The Guild is also realistic to know that with declining membership we have to be seen to be moving forward. We are an organisation too rich in history not to evolve in the future, and by listening to new needs we will be able to continue to support and advocate for war widows and those we embrace.’

On Monday 12 December, the War Widows’ Guild will continue to commemorate 70 years of support and advocacy with a morning tea at the recently opened Isle of Voyage at Elizabeth Quay. This, too, will be significant because the building itself was once the Esplanade Kiosk, tearooms run by the War Widows’ Guild from 1949 to 1963.

But that’s a fascinating story for another time.

Previous Monkeying Around: In Conversation with Asta Lander
Next 6 Degrees of Separation: Revolutionary Road