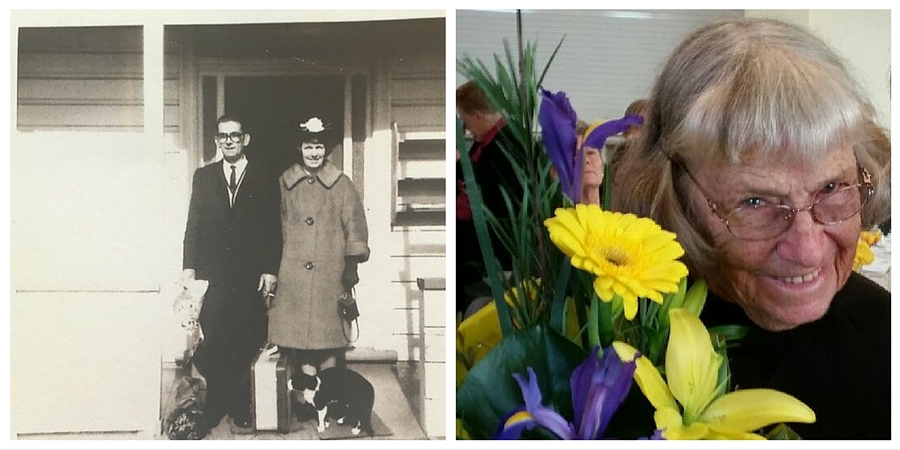 You’ve most likely heard the names Kate Cebrano, Frankie J. Holden and Amanda Keller, who were among those recently recognised in the 2016 Queen’s birthday honours list. But you probably haven’t heard of Edna Richardson, who was on that same list.

Now in her eighties, Edna Richardson has spent the past twenty years visiting war widows in hospital. She does so without fanfare or expecting anything in return. When I saw her on the day her OAM was announced, she seemed surprised at the fuss, saying, “I get more out of it than they do.”

Edna grew up in the Fremantle area, and left school at fourteen, in the midst of the Second World War. Her first job was sewing buttons – never zips – on army skirts for Spargo Mantle Manufacturers, which was situated opposite His Majesty’s Theatre in Hay Street. She was there when the war ended, too, and remembers celebrating in the city streets.

“It was quite exciting. Everybody was happy and hugging each other. And I thought, Oh, I hope they don’t ever go again.”

Edna’s father and husband both served in the armed forces, although in different world wars. Her father, William Henry McGregor, survived the Somme, while her husband, Roy Fairfax Richardson, was one of the Rats of Tobruk.

“Not that he ever told me much,” Edna says. “Everyone tells me their husbands only tell them one story. So if you put all the stories together, it’s very interesting – lots of things that never came out in the paper.”

She met Roy in New Zealand after the war, while working at the same car manufacturer. They married and had a daughter before returning to Australia, where Edna turned her hand to creating wedding dresses with a neighbour. “We got on really well. I had a lot of people wanting me to make their wedding dress. We used to have some fun with that.”

When Roy died in 1979, Edna was just fifty, and her daughter thirteen. Thanks to the support and assistance of Legacy, it didn’t take long for her to receive her war widows’ pension. However, it would be another sixteen years before she met fellow war widow, Doreen Taylor, who asked her, “Why haven’t you joined the War Widows’ Guild?”

“I didn’t know about it,” Edna replied.

Edna immediately joined and, within a year, found herself volunteering to visit war widows in Hollywood Hospital, initially with her friend Sheila Scott.

Twenty years later, Edna faithfully continues her weekly visits to Hollywood Hospital, which usually involves heading off from home before 9 am, and returning in the late afternoon. Only recently has Edna conceded to the Guild’s offer of taxi vouchers, and even then only one way. She figures that while the morning taxi ride relieves her of walking up the hill to the bus stop, she can still manage to walk down the hill to her house in the afternoon.

Asked why she continues to volunteer for the hospital visiting, Edna says, “Well, the people are nice … we’ve been through the same experiences.”

The recent OAM is not the first time Edna’s commitment to caring for others has been acknowledged. In 2001, she was recognised by Hollywood Executive Director, Kevin Cass Ryall, for her voluntary service to Hollywood Private Hospital. This was followed by a ‘Certificate of Recognition’ by the Department of Veterans’ Affairs in 2005. The War Widows’ Guild awarded her life membership in 2013.

So, how does Edna feel about being acknowledged with an OAM?

“Not worthy at all – because I know so many people who do so much.”

As for being part of the War Widows’ Guild, Edna says:

“You feel it’s like being in a family. I love to say I belong to the War Widows’ Guild. You’ve got to belong somewhere and it’s been good for me. I’ve met lovely people and I’ve had lot’s of fun.”

Previous 6 Degrees of Separation: Midnight’s Children
Next Discarded Manuscripts, Diving In and Other News