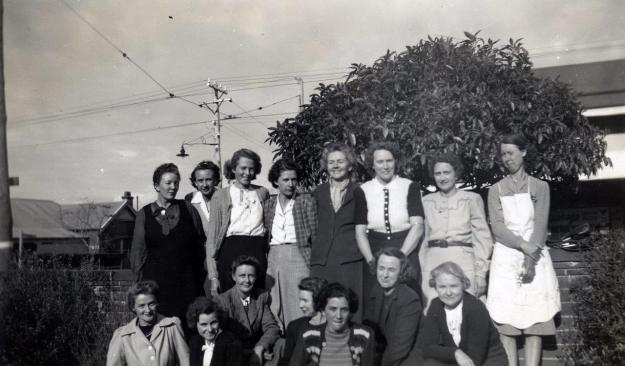 With the Second World War and its aftermath at the core of Many Hearts, One Voice: the story of the War Widows’ Guild in Western Australia, the events of that time period have been on my mind for quite some time. I was therefore a little surprised (but probably shouldn’t have been) that the 70th anniversary of VP Day came and went with little fuss or media coverage earlier this month.

I wonder whether so much time, energy and money has gone into the centenary of the First World War, especially the Gallipoli campaign, that nobody can be bothered to remember the end of a subsequent war and return to peace. Or whether 70 years is just not ‘significant’ enough – perhaps we need to wait another 5 years until the 75th or even 30 years until the 100th anniversary of these events. It’s quite possible that if I hadn’t spent the past eight years hearing numerous stories of the Second World War and what it was like for those who lived through it, then it wouldn’t have been on my radar either.

But it was – and is. And for me one thing is clear: we can’t afford to wait for the centenary of the Second World War. By then almost every person with a direct connection to that period of our history will be gone. Even waiting 5 years will be too late for many.

As it is, in the time it’s taken for me to research and write Many Hearts, One Voice, some of the women whose stories I’ve recorded have passed away. In some cases, I was too late, missing the opportunity to speak with them by mere weeks or months. And sometimes, I found someone who’d played a key role, only to discover dementia had robbed them – and us – of valuable memories.

Just this month, a week prior to VP Day, I lost my last living connection to the founding members of the War Widows’ Guild – a group of courageous and determined women who challenged the status quo. Peggy Litchfield (formerly Peggy Walker) was one of them, working as the Guild’s weaving instructor in the early post-war years. When I interviewed her in 2011, she was 95 and her memory intact. I had dearly hoped she would be the guest of honour at the book launch in November. Instead, I’ll have to acknowledge her in absentia.

What a privilege it’s been to sit with many war widows – and occasionally their children, themselves now in their 60s and 70s. There was something precious about learning about our past through the stories of their lives. Even those who were initially reluctant to be formally interviewed, claiming, ‘I haven’t got anything interesting to tell you,’ seemed to relish sharing their stories once they forgot about the voice recorder on the table between us. And, without exception, I always heard something interesting.

But if I had waited any longer, countless experiences and perspectives would have been lost forever. With a few notable exceptions such as the work of Australian historian Joy Damousi, war widows have often been omitted – or at least sidelined – in official accounts of war and the post-war era.

We need to record these stories now – whether it’s those who served overseas, the families who remained on the home front, or the widows and children who faced an uncertain future after the war. It shouldn’t need a significant commemorative period for us to make a start. If we choose to wait, it might just be too late.