On My Bedside Table: Historical Fiction 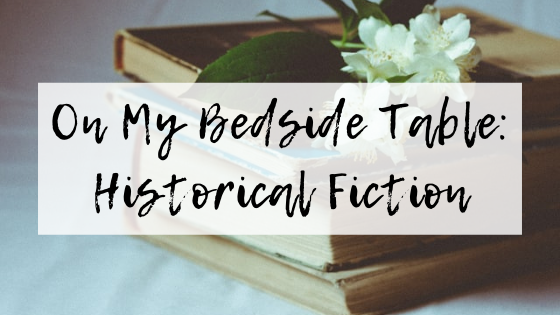 I haven’t always been a reader of historical fiction. When I was much younger, I preferred contemporary fiction, and I can’t pinpoint when that started to change. Perhaps when I started researching the Second World War for my book about war widows. Or maybe a few years before that when I finally started taking an interest in the lives of my own ancestors.

Regardless of how my interest in historical fiction came about though, I am now an avid reader. I’ve recently read three, all coincidentally set during the Second World War, but in different countries. Beneath a Scarlett Sky by Mark Sullivan is based on a true story and set in northern Italy, not far from where my husband’s father was born. Natasha Lester’s new novel, The Riviera House, is set in France, and I’m sure you don’t need me to tell you where The Last Bookshop in London by Madeline Martin is based. 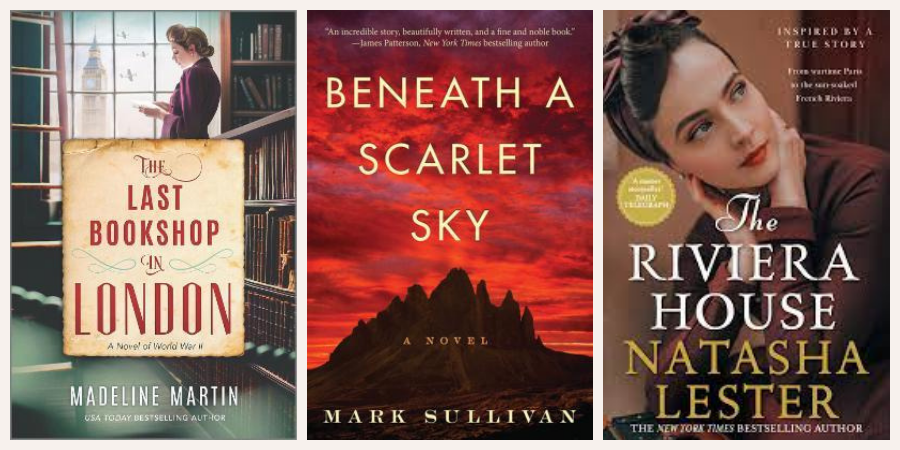 The Last Bookshop in London by Madeline Martin (2021) 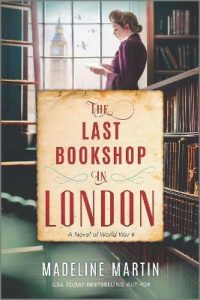 When Grace Bennett finds herself working in a dusty bookshop in London at the start of the Second World War, she expects to stay just long enough to obtain a letter of recommendation for a position at Harrods. What she doesn’t expect is to find a purpose and a place where she truly belongs.

Grace isn’t even much of a reader until she meets George Anderson, who gifts her a copy of a childhood favourite just as he enlists in the RAF. What begins as an obligation to finish the book Geroge has given her quickly turns into a growing passion for reading. Subsequently, it is through books that she finds a way to buoy those around her during the long hours sitting in air raid shelters.

Madeline Martin evokes vivid descriptions of London during the Blitz, which include the air raids that flattened homes and destroyed livelihoods, and the daily grind of shortages, rations and farewells. There is the growing uncertainty of what tomorrow will hold and the devastating loss of family, friends and neighbours. But there is also love and friendship, courage, resilience and endurance.

While the story is told through Grace’s eyes, there are also some wonderfully drawn secondary characters such as bookshop owner Mr Evans, best friend Viv and landlord Mrs Weatherford. Although peppered with heartache, The Last Bookshop in London by Madeline Martin is ultimately a heartwarming novel about the power of books and storytelling to unite a community.

Why The Last Bookshop in London is on my bedside table: a friend loaned it to me after she heard me talking about my great great aunt who had owned a bookshop in Bristol during the 1930s and 1940s, including during the Blitz.

Beneath a Scarlet Sky by Mark Sullivan (2017) 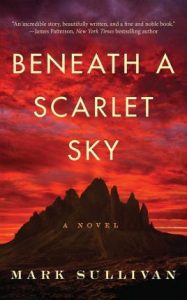 When the Lella family home in Milan is destroyed by Allied bombs, Pino Lella and his brother are sent to stay with a priest high in the Alps north of Lake Como, where they help smuggle Jews over the mountains and into Switzerland. Later, Pino is forced to enlist in the German army, but before long he finds himself working as a driver for General Hans Leyer, a Nazi commander with a direct line of communication to both Mussolini and Hitler. The role allows him to spy for the resistance, but he must also bear witness to numerous atrocities committed by the Nazis as well as enduring the rejection of those he loves because they think he’s a traitor.

The events of Pino’s life form a dramatic narrative filled with numerous life-risking moments, a dash of romance and times of devastating heartbreak. Through Pino’s story, readers are offered a fascinating insight into the lived experience of the Italian people under German occupation.

Beneath a Scarlet Sky is based on the true story of Pino Lella, who was still a teenager when the Nazis occupied Italy during the Second World War. Author Mark Sullivan undertook extensive research, which included oral history interviews with Pino himself. However, Sullivan clarifies that this is ultimately a book of historical fiction due to the “scant physical evidence that remains” today.

Why Beneath a Scarlet Sky is on my bedside table: It was loaned to me by an Italian friend when she heard I was researching Italy during the Second World War. My husband’s grandparents grew up in the same area of Northern Italy as Pino Lella. Nonno was a partisan—a member of the Italian resistance—in the same Alps that Pino trekked through, and we have spent a fair bit of time at Lake Garda (pre-COVID of course), where Pino meets Mussolini while working as General Leyer’s driver turned translator.

The Riviera House by Natasha Lester (2021) 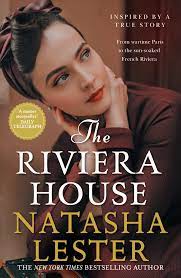 Eliane Dufort is working at the Louvre in Paris when the Nazis sweep in to occupy the famous city during the Second World War. Her painter beau leaves for England, her sisters are sent to apparent safety in the country, and Eliane finds herself part of a dangerous mission to document the art work being stolen by the Germans. While Eliane is a fictional character, the woman she worked with, Rose Valland, is real, and Natasha Lester’s The Riviera House provides a fascinating insight into those who literally put their lives on the line to protect art during the Second World War.

In the present day, Remy Lang travels to a stunning house on the French Riviera in an unsuccessful attempt to outrun her grief. While there, she discovers a catalogue containing a list of artworks stolen during the Second World War, including one that hung on her bedroom wall during her childhood. What is the connection between that painting, the house and its previous occupants? And what clues might they offer to the mystery of her own family history?

As with Natasha Lester’s previous historical fiction novels, The Riviera House is a dual time-line narrative with numerous twists and turns. It is a novel about love and loss, courage and betrayal. It is about those who risked their lives for a cause bigger than themselves. And it is about finding hope and re-imagining the future when the present appears impossibly bleak.

Why The Rivieria House is on my bedside table: I have read all of Natasha Lester’s previous historical fiction. I’ve always appreciated the extensive research Lester undertakes, and the way she weaves historical events and people into her fictional narrative, particularly the strong women who contributed to and participated in the Second World War but who are much less well-known than their male counterparts. Above all, I simply love a good read that has me switching off the TV and staying up way past my bedtime because I just want to read one more chapter.

What was the last work of historical fiction that you’ve read? Would you recommend it?

And what else is currently on your bedside table?

Previous Book Recommendations for Family Historians
Next Leaving a Legacy: Why Your Story Matters