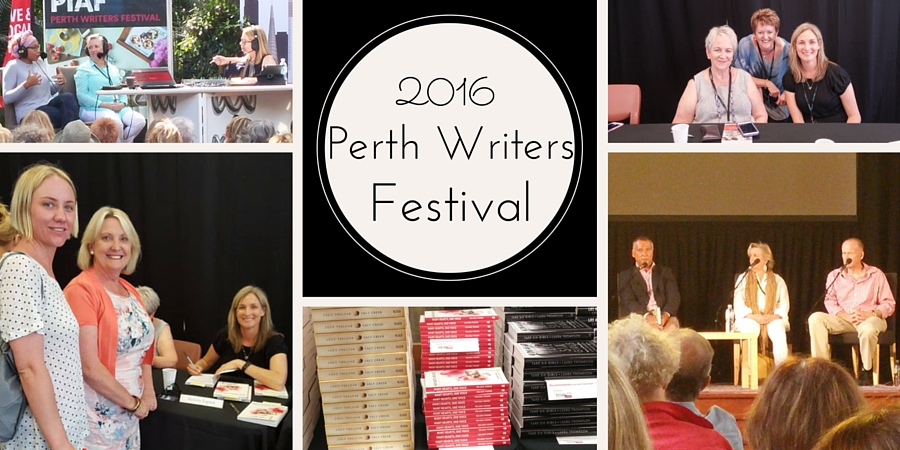 Here I sit, tucked away in my cabin in the hills. I’m looking out through the trees to the cityscape, listening to the birdsong, and ruminating over the weekend that was the 2016 Perth Writers Festival.

I’ve attended the Perth Writers Festival for a number of years, but this was my first as a published author. As usual, it was impossible to get to every session I wanted to attend (and at least two clashed with my own!), so here are just a few highlights from those I did manage to see.

After Shaun Nannup’s moving welcome to country, we heard from Roman Krznaric, an author, cultural thinker and founder of the world’s first Empathy Museum and the digital Empathy Library.  After distinguishing between sympathy and empathy, he outlined 6 key habits of highly empathic people, which he explores in detail in Empathy: Why It Matters  and How To Get It.

My personal ‘aha’ moment was when he spoke about ’empathy deficit’ and shared the story of losing his mother at a young age. He has few memories from before that time, which he explained to be a natural trauma response; he switched off emotionally and lost his empathy for others. I meet many children who come from backgrounds where life has been – and often continues to be – challenging. I wondered at the potential  if we could somehow instil empathy in these kids, something Krznaric believes should be taught in schools alongside more traditional subjects.

I almost missed hearing Yassmin Abdel-Magied, but caught her conversation with Gillian O’Shaughnessy as part of the live broadcast of ABC Afternoons. Originally from Sudan, Yassmin grew up in Australia,  but never saw herself reflected on television or in the books she read. So she wrote Yassmin’s Story. I was so blown away – and entertained – by the down-to-earth, articulate and humorous way she spoke, I rushed over to the bookshop to buy the book. Review to come.

One of Friday’s highlights turned out not to be a session in itself, although I enjoyed several, including This Suburban Life with Tony Birch, Steven Carroll and Martin McKenzie-Murray. While waiting for the panel to begin, a woman walked down the aisle, then paused at the end of my row.

‘Is anybody sitting here?’ she asked.

I indicated it was free, she sat down, and as we chatted, the conversation turned to what I’d written.

‘You probably know my mum,then,’ she said when I told her.

It turns out that not only do I know her mother, Florence Gordon, but her story is included in Many Hearts, One Voice. Now, as a result of this chance encounter, we’re making plans for a little reunion …

With a Fremantle Press breakfast first thing, and my panel, Shared Narratives, mid-afternoon on Saturday, I was too jittery to focus on many sessions other than my own. But I did manage to catch the launch of the anthology, Purple Prose, edited by Liz Byrski and Rachel Robertson, and filled with contributions from numerous writers I admire, including Natasha Lester, Amanda Curtin, Jacqueline Wright and Lily Chan.

I spent Sunday morning attending Family Day sessions with my daughter. Miss 11’s festival highlights were meeting A. J. Betts, the author of her favourite book, Zac and Mia, and listening to UK author Katherine Rundell. Katherine Rundell kept us entertained and enthralled as she talked about her novel, The Wolf Wilder. Clearly, the rest of the audience thought she was great, too, because by the time I made it to the bookshop, two of her three novels were sold out.

We Need to Talk about This

I was moved, challenged and inspired by Stan Grant, Jane Caro and Lindsay Tanner in We Need to Talk about This. Stan Grant asked the question, ‘How do we live with the weight of our history?’ He suggested that although we’ve begun the conversation time and time again, we’ve faltered and shied away, but can’t spend another generation waiting for something to be done. I was particularly struck by his comment that for many Aboriginal people, ‘History has not passed for us.’ Perhaps more of us need to truly listen to – and fully understand – this without giving the pat response about ‘getting over it’.

Jane Caro talked about the idea that ‘revealing vulnerability is seen as weakness’ and that there is often shame associated with anxiety. Yet, in writing Plain-speaking Jane, she experienced not shame but a chorus of, ‘Me too.’ Jane resisted being told she was courageous, instead stating she was lucky enough to have a voice and therefore must speak up.

Lindsay Tanner, who is interested in a giving a voice to those without one, introduced the idea of a ‘relational pension’ explaining that the relationships we make in the prime of our lives are what we drawn down on in later years. I immediately thought about my grandfather who, at 93, probably has a better social life than I do; he’s reaping the benefits of the many relationships he’s invested in over a lifetime. I can also think of one or two people for whom the opposite is true.

All Good Things must come to an End

As you can see, this is just a small sample of what was on offer at the 2106 Perth Writers Festival. There were many great authors and panels I missed altogether. If you were there over the weekend, what sessions were you inspired by? Or if you live far away from Perth, let me know about a writers festival or author talk you’d recommend where you are.