6 Degrees of Separation: From It to The Bone Sparrow It’s the first Saturday of the month, which means it’s time for Six Degrees of Separation, that literary meme where Kate from booksaremyfavouriteandbest provides us with a book title. We then link it to six other books in any random way our brains decide to make connections. Just like writers being given the same writing prompt, it’s amazing how diverse participants’ chains are.

This month’s chain begins with Stephen King’s It, which was recently adapted for the cinema. Like Kate, I’m a bit of a scaredy cat, and could never bring myself to read it, even though I love the writing wisdom he imparts in On Writing.

Patricia Cornwell also writes novels that kept me awake at night. With each one of her Kay Scarpetta books becoming darker than the last, I eventually stopped reading them, the final one being Black Notice.

I also read some of Kathy Reich’s Bones series, waaaay before it became a popular television show. From memory, I attended a talk she gave about using forensics in writing soon after her debut novel, Deja Dead was published. The details of where and when are rather vague though, so perhaps I’m dreaming that up.

A writer I know I’ve heard speak is Stan Grant. I attended a session at the 2015 Perth Writers Festival where he was on a panel with Jane Caro. I was so impressed that I immediately bought a copy of Talking to My Country. Tim Winton doesn’t give many talks, so I grabbed the opportunity to buy tickets to hear him speak at the upcoming 2018 Perth Writers Festival. My favourite of his books is still Cloudstreet, although I’m currently reading his collection of autobiographical essays, The Boy Behind the Curtain.

Tim Winton is an ambassador for 12 Buckets,a Perth based organisation that provides mentors to kids who need extra support (and which I’m involved in). Another author who recently offered some wonderful support is Tess Woods, author of Beautiful Messy Love. She rallied other writers and publishers to donate books to the school library of one of our 12 Buckets schools. It was such a buzz to see the delight on the librarian’s face to receive so many new books for her students.

My favourite character in Beautiful Messy Love is Anna, who is strong and determined and cares deeply for those around her without compromising who she is. Originally from Egypt, Anna’s family took refuge in Australia after learning their lives were in grave danger.

A friend has just recommended another book about seeking refuge in Australia – The Bone Sparrow by Zana Fraillon. It’s the story of Subhi, who has spent his young life in immigration detention, and Jimmie, a girl who arrives at the detention centre’s fence one night. I’ve just added this to my to-read list, and I’m thinking it will go straight to the top of the pile. 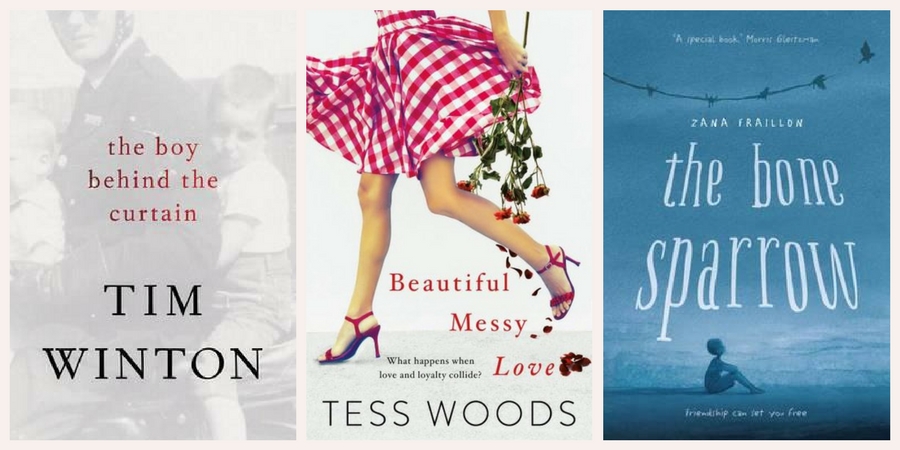 So, I began with Stephen King’s classic horror novel and entered the world of some dark, keep-me-up-at-night tales. I then shifted to real-life stories of two Australian men I admire, before landing on stories about issues of deep personal interest.

Let me know via the comments section, or post on your own blog if you have one. And head over to booksaremyfavouriteandbest to see where it took others.

The new year will begin with international bestseller  No.1 Ladies Detective Agency by Alexander McCall Smith on 6 January 2018. Previous How I Met Your Grandmother and Other Stories
Next 6 Degrees of Separation: From No. 1 Ladies’ Detective Agency to …