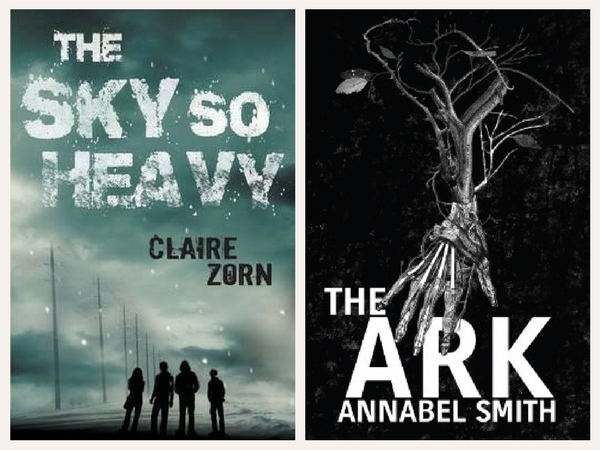 With the current popularity of dystopian novels, it would be easy to think it’s a recent phenomena; however, it apparently dates back to the eighteenth century, and includes Gulliver’s Travels (1726). Of course there are more recent classics, such as The Trial by Franz Kafka (1925), Brave New World by Aldous Huxley (1932) and 1984 by George Orwell (1949).

Fast forward a few more decades and we have Z for Zachariah by Robert O’Brien, which was published in 1974, and Margaret Atwood’s 1985 novel, The Handmaid’s Tale, both of which have found their way onto the school curriculum at various times.

Series such as The Hunger Games by Suzanne Collins, The Maze Runner by James Dashner and Divergent by Veronica Roth have become blockbusters, as books and movies, but there are also a number of well-written and intriguing novels set in a re-imagined Australian future. Here are seven of them, in the order in which I read them. 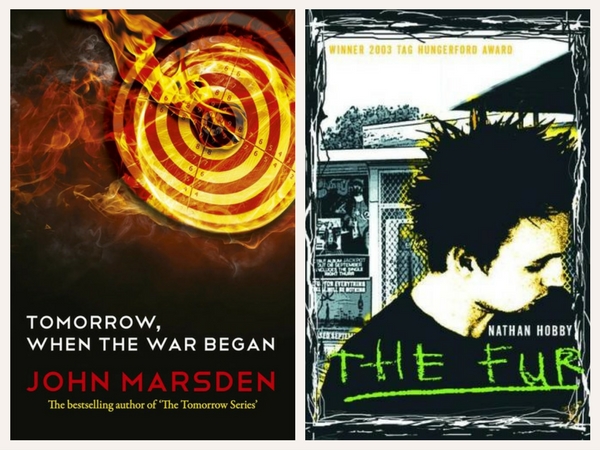 Ellie and her friends return from a weekend camping trip to discover the country has been invaded by the armed forces of a unspecified foreign country. Their family and friends have been rounded up in the town’s showgrounds, which has become a makeshift prisoner-of-war camp. Ellie and her friends must use their skills and wit to avoid capture, survive in occupied Australia and fight back against the enemy.

I had recently begun teaching when I read the first in the Tomorrow series, and was excited to discover a book my reluctant readers might actually finish. They weren’t the only ones; I looked forward to buying each new book as it was released, and the series remains one of my all-time favourites.

Another book I read while teaching was The Fur by Nathan Hobby, which won the 2002 T.A.G. Hungerford award for an unpublished manuscript, resulting in a publishing contract with Fremantle Press.

The ‘Western Third’ of Australia has been infested by ‘the fur’, an infectious and lethal fungus, and has been quarantined from the rest of the country by a twenty-metre-high razor wire fence and armed guards at each road crossing the border. The UN has intervened, items such as fridges, music and binoculars are rarities, and people are dying from inadequate medical assistance.

Teenager Michael O’Sullivan must decide whether to attempt an escape through the wire and across the Nullarbor with new friend Rebecca, or stay and join the revolution to overthrow ‘classism, oppression and injustice’.

Fin lives with his father, brother and step-mother in the Blue Mountains, when an unnamed country fires a nuclear missile, sparking a nuclear winter. After his father disappears and conditions deteriorate, Fin must care for his brother Max and work out how to survive.

As people resort to violence and theft to obtain the basic necessities, Fin decides their only chance is to leave their home and head to Sydney to find their mother – and so Max and Fin join the thousands who have been displaced by the disaster.

You can find a more detailed review of The Sky so Heavy elsewhere on my blog.

The Ark is set later this century in the wake of a food and oil crisis. An underground bunker, known as The Ark, is built inside Mount Kosciusko to protect five billion speed specimens. While twenty-six employees and their immediate families are holed up inside The Ark, much of the general population are left to fend for themselves in a world that is governed by violence and lawlessness (known as The Chaos in the book).

The Ark is more than simply a novel; it’s written as a series of documents and comes with its own app, allowing readers to interact with the story at various levels.

See a more detailed review of The Ark here. 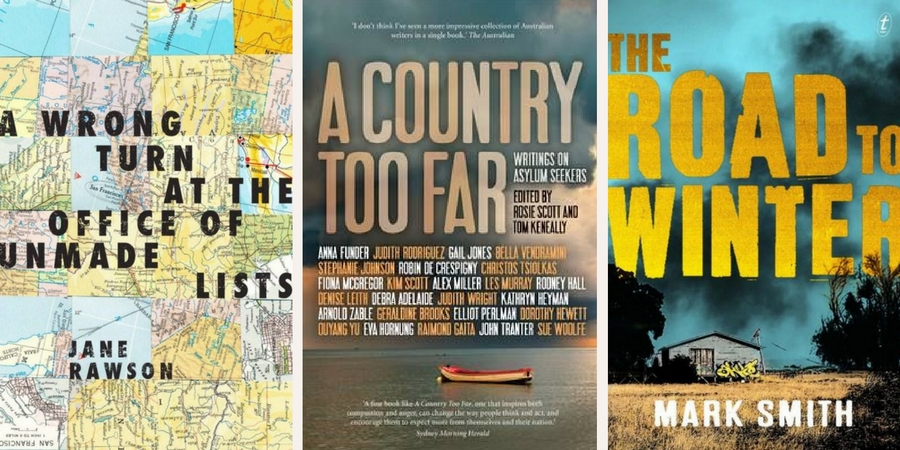 It’s been just over two years since a fire ripped through Caddy’s home, killing her husband Harry and destroying everything they owned. She is one of many from the lower middle class struggling to survive in a Melbourne that has fallen into disrepair and disarray.

This hot, dry Melbourne is a far cry from the four-seasons-in-one-day that I’ve experienced, albeit as a visitor. Life is tough and money scarce for ordinary citizens like Caddy, who has to make do with odd jobs to earn a few cents here and there. An overwhelmed power supply results in frequent blackouts, trains are scarce, bees have disappeared and water is more expensive than beer. Thousands of people live in the underground train stations with no water or ventilation. Elsewhere, settlements have sprouted up and UN soldiers have been brought in to maintain order.

A Wrong Turn at the Office of Unmade Lists won the 2014 Most Underrated Book of the Year Award (MUBA).

This short story imagines a future Australia where rising temperatures have caused increasing fires and floods, and much of the country is either under water or has become desert. As a result, Australians have fled across the sea to New Zealand. At some point, the crossing became illegal and Australian asylum seekers are now housed in detention camps. At Camp Ahitereria, there has been a riot resulting in an unknown number of injuries and the destruction of property. It is suggested that the riot occurred because the Australians’ home brew was confiscated and poured out in front of them.

Finn has kept himself alive for two winters after a virus wiped out his town. Initially, residents thought the town’s isolation would save them, but the virus eventually spread beyond the cities. People did what they could to save themselves, including fighting over food in the supermarket and ransacking houses for supplies.

The town is ‘deserted now, all the shops cleaned out and most of the houses stripped of anything useful’. Violent gangs roam the countryside, and Finn does what he can to avoid them and stay alive. Then he meets Rosie, and Finn must decide whether to risk his own survival to help her.

What aspect/s of these dystopian futures can you most imagine occurring here in Australia?

If you and/or your family decided that fleeing provided the best chance of survival, as Fin did in The Sky So Heavy, where would you go and how would you get there? If you think you would choose to stay, like Ellie and her friends in Tomorrow When the War Began, what would you do to protect your friends and family?

I’d love to know your thoughts, so please leave a response in the comments section below. 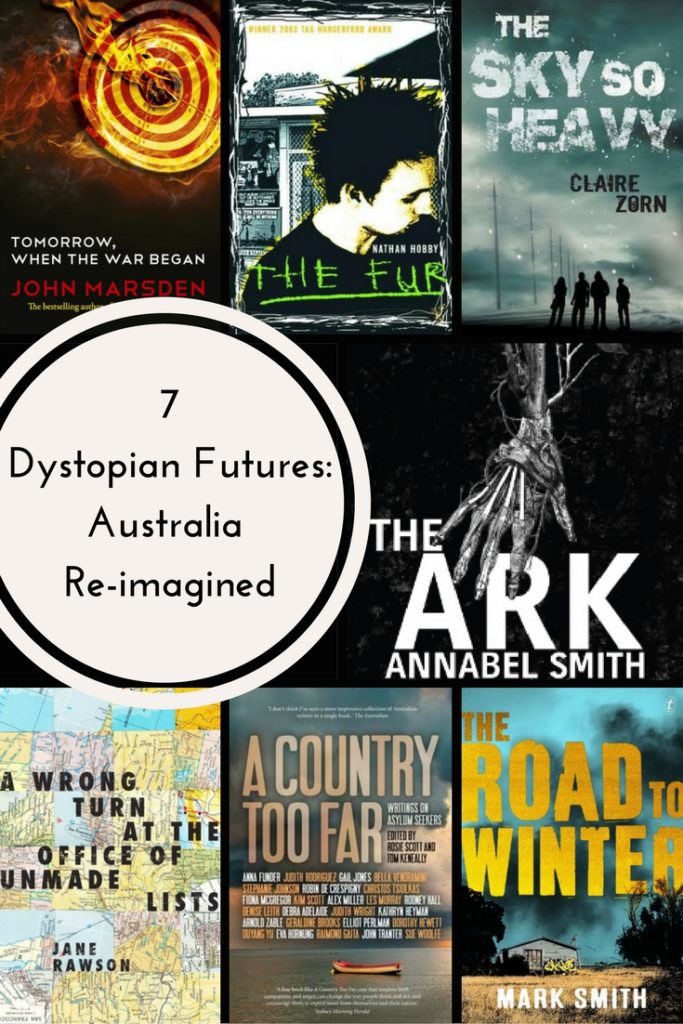