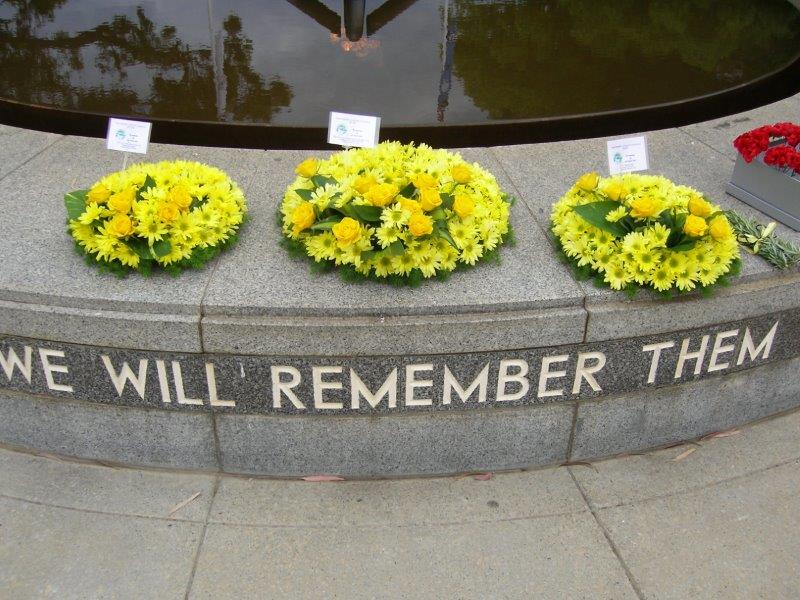 Will you be commemorating Anzac Day on 25 April this year?

I have written elsewhere about why I do choose to acknowledge Anzac Day, as well as the recognition that the occasion is problematic for some. In part, I said:

‘There has not always been room for those whose experience or understanding has deviated from the legend. Yet, surely we can find room for additional stories. To include them is not to reject the collective memory of Anzac … rather than diminishing our history, the inclusion of multiple perspectives enriches the narratives we tell.’

I also asked: ‘Whose story would you add to the many stories that matter this Anzac Day?’

This year, I’ve attempted to (partly) answer that question by collating a list of non-fiction books, offering a range of perspectives about Australians and war. They’re not necessarily the most recent publications; instead, I’ve included titles that have either stayed with me in some way, or are on my to-read list. 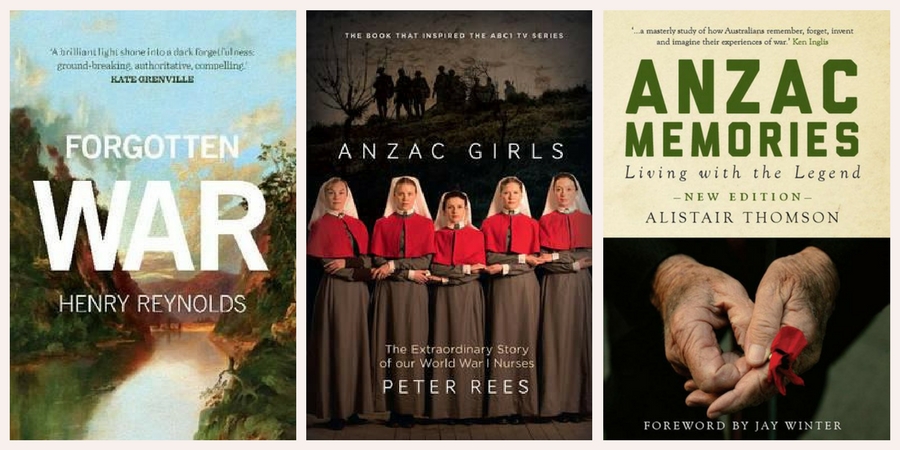 Winner of the 2014 Victorian Premier’s Award, Forgotten War continues the story told in Henry Reynold’s previous book, The Other Side, in which he argued we have ignored the high level of violence that occurred during the settlement of Australia. Further research and fieldwork led to Forgotten War and offers a thorough exploration of the causes of the frontier wars between white colonists and Aboriginal people. Reynolds discusses how many people died and whether the colonists themselves saw frontier conflict as a form of warfare. On my to-read list.

Anzac Girls (originally titled The Other Anzacs: Nurses at War 1914-1918) by Peter Rees

You may remember the 6-part series, Anzac Girls, shown on the ABC in 2014, as we began commemorating the centenary of the First World War. The Other Anzacs is the book on which the television show was based.

Using diaries and letters, Peter Rees reconstructs the stories of a number of Australian and New Zealand nurses. Not only does he recall the hospital camps, wards, tent surgeries and conditions in which these women lived and worked, but he also draws us into their friendships and relationships.

You can hear Peter Rees introducing the nurses’ stories and see some of the archival material he used in this short video:

Anzac Memories: Living with the Legend by Alistair Thomson

When Alistair Thomson interviewed a group of First World War veterans in the 1990s, he discovered their responses to Anzac Day and the Anzac legend were far from uniform. For some, Anzac Day provided a way to publicly ‘articulate the war experience, and their Anzac identity’ but others felt ‘the gap between the public legend and their own individual experience was too great.’ (pp. 141-142, 1st ed.)

I read the original edition of this book, published in 1994, and was fascinated not only by the men’s recollections of their own experiences, but Thomson’s exploration of how the collective memory of Anzac can inform and impact an individual’s telling and re-telling of those experiences.

A second edition was published in 2013, which I’ll be interested to read. Among other additions, Thomson returns to a story in his own family, which he wasn’t able to write about twenty years ago because of the stigma of war and mental illness. 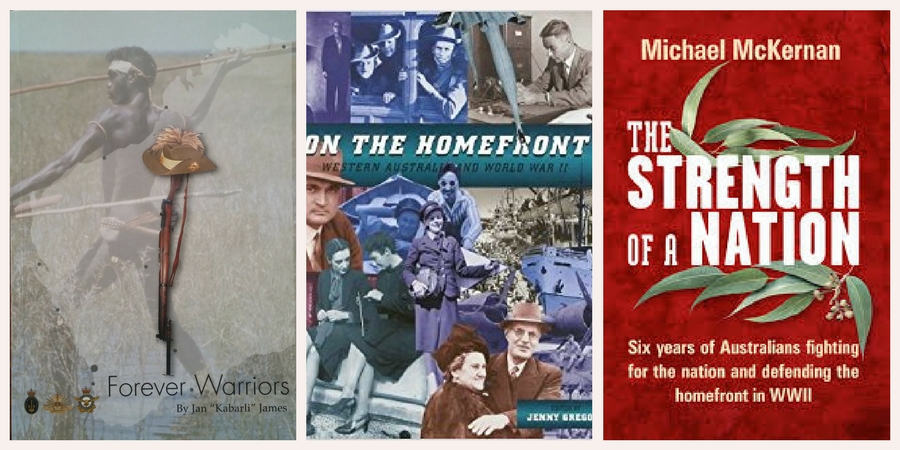 One of the stories often forgotten is the experience and contribution of Indigenous servicemen. Usually, they returned home only to be denied the acknowledgement and benefits offered their white counterparts.

A large part of James’ research for Forever Warriors was painstakingly collating the profile of ever known Indigenous service man and woman in Western Australia, including my brother’s grandfather, Arthur Edward Morrison, who survived the fall of Singapore and spent the rest of the war in a POW camp on the Burma railway.

On the Homefront: Western Australia and World War II, edited by Jenny Gregory

I would love to own a copy of this book, but they appear difficult to obtain. While researching Many Hearts, One Voice, I had to make do with repeatedly borrowing the copy owned by my local library (thanks Stirling Libraries!).

On the Homefront provides valuable understanding of a range of Australian events and issues during the Second World War. Although it doesn’t deal with war widows specifically, there are chapters on various aspects of life in Western Australia during and immediately following the war.

The Strength of a Nation: Six Years of Australians Fighting for the Nation and Defending the Homefront in WWII by Michael McKernan

The most engaging account I have read about the Second World War is Michael McKernan’s Strength of a Nation. McKernan writes with an informal, personal tone, almost like a conversation between him and the reader. He includes a combination of personal accounts and broader contextual history as well as the events of the war – both overseas and at home. 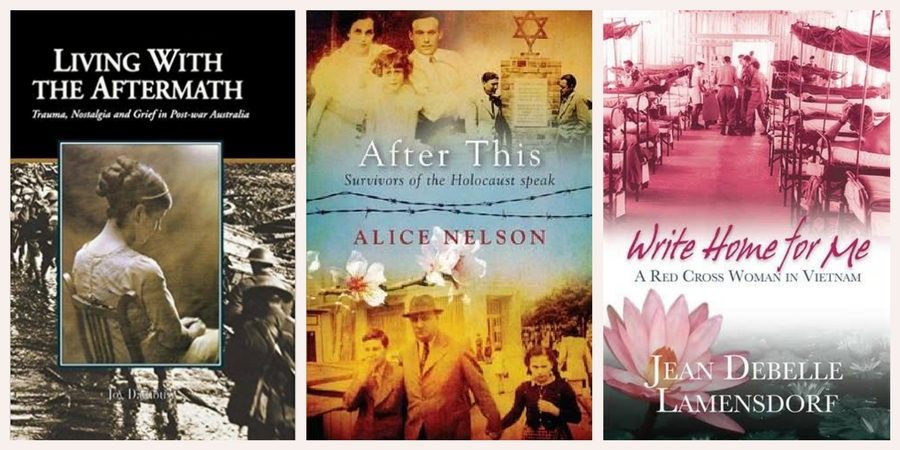 Living with the Aftermath: Trauma, Nostalgia and Grief in Post-War Australia (and The Labour of Loss: Mourning, Memory and Wartime Bereavement in Australia) by Joy Damousi

When I first began writing Many Hearts, One Voice, I could count on one hand (quite literally!) the books detailing the experiences of war widows in Australia. Two of those five were books by Joy Damousi. I am indebted to her for her extensive research into the social and emotional impact on those widowed as a result of conflict. I’m about to re-read her work as I’m hoping to use some of my past research in my current work-in-progress.

Write Home for Me: A Red Cross Woman in Vietnam by Jean Debelle Lamensdorf

In 1966, Jean Debelle was a journalist working in Adelaide, but wanting to cover the war in Vietnam; however, only male journalists were being sent to the conflict. Jean’s way around this was to volunteer with the Red Cross. Write Home for Me is her first-hand account of her time in Vietnam. She writes about the wounded soldiers who asked her to ‘write home for me’, the Vietnamese attempting to go about their daily lives in the midst of war, and being an eye witness to the aftermath of Long Tan and the war’s worst land mine disaster.

After This: Survivors of the Holocaust Speak by Alice Nelson

In this collection of stories, Alice Nelson enables survivors to speak for themselves through the use of oral history recordings and transcripts. According to Nelson, those interviewed were keen for their stories to not only include what happened to them during the Second World War, but also the lives they went on to have afterwards in Australia.

For many survivors, sharing their stories came late in life. If it wasn’t for Nelson – and the Holocaust Institute of Western Australia – we might never have heard them. The stories are simply told and contain many similarities, yet each is also about an individual and everything that makes them and their story unique. The cumulative effect is devastatingly powerful. 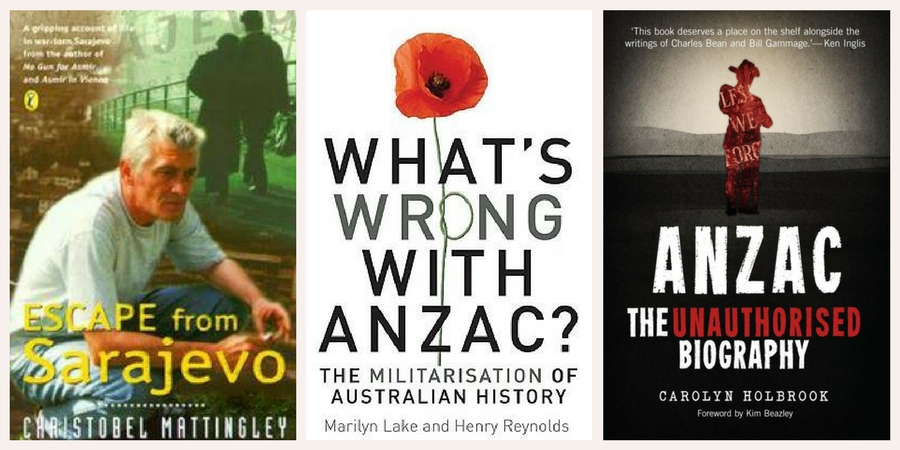 Escape from Sarajevo by Christobel Mattingley

This was the book that changed my perception of refugees, especially those forced to flee due to war.

Escape from Sarajevo was published in 1996, not long after the end of the Bosnian War (1992-1995), and tells the story of a family caught up in the conflict. It was in reading this book that I became aware that these were people not all that different to me. Here was a middle-class family going about their daily life – work, school, birthday parties, drawing – until their city is rocked by war. The father helps his wife and children escape to safety, while he remains behind in the once beautiful city as it is bombed beyond recognition.

The war has caused Asmir and his family to become refugees. They are one of the lucky ones, making it to Vienna and later to Australia, but the journey to get there is fraught with risk and danger. I would love to know where Asmir and his family are now; perhaps I’ll do some digging and let you know.

What’s Wrong with Anzac? The Militarisation of Australian History by Marilyn Lake and Henry Reynolds with Mark McKenna and Joy Damousi

The predominant image of the Anzac legend is one of sacrifice and of mateship, and the forging of a nation in the battles of war. In What’s Wrong with Anzac? Marilyn Lake and Henry Reynolds argue that there is an ‘assumption that Australian identity and national character can be conflated with the Anzac Spirit’ and ‘the key premise of the Anzac legend is that nations and men are made in war'(p. 157).

This book raises questions about our obsession with and understanding of Anzac, whether historical fact has been replaced with mythology, and whether the loss and death overseas have been justified.

Carolyn Holbrook’s book evolved out of the question, ‘Why are Australians of the 21st century so emotionally attached to a military event that took place nearly 100 years ago?’

The ‘unauthorised’ biography looks at the history of Anzac, it’s periods of decline and times of resurgence, and how each generation has interpreted the meaning of war, the legend of Anzac, and commemoration. On my to-read pile (and already on my bookshelf).

Of course, this list is far from exhaustive. There are so many more perspectives than what I’ve been able to include here. These are simply some titles that have caught my attention over the past few years, so, I’d love your input: what non-fiction book have you read that’s engaging and offers an additional perspective to the existing narratives of war and/or Anzac? 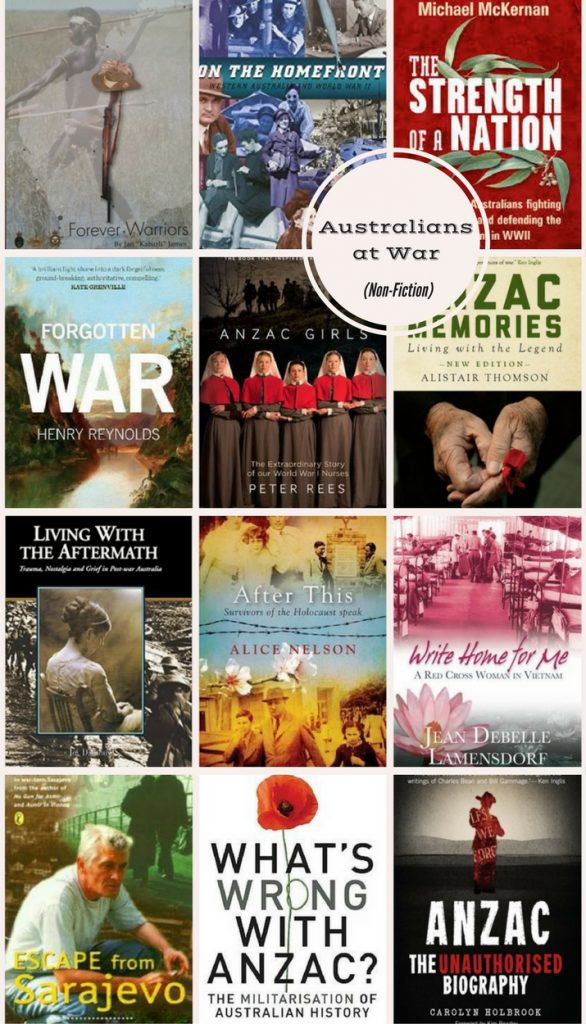