Fashion Stakes or a Drunken Day Out? Critical Thinking in an Age of Alternative Facts 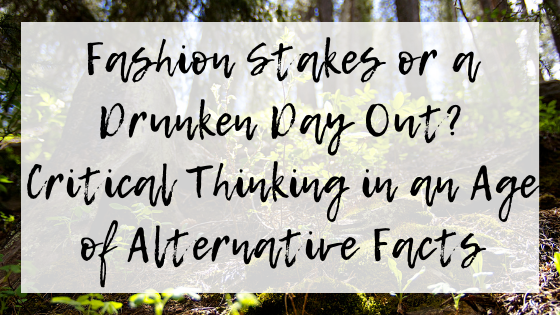 A group of women in stylish dresses and high heels are sipping champagne in elegant glasses under a marquee. The men accompanying them wear suits and make polite conversation.

Elsewhere, two young women, carrying the shoes they discarded sometime earlier, stumble their way to the exit gate of Flemington Racecourse. Several guys sit on an esky, holding beer cans nestled in stubby holders. Pink faced from a day in the sun, they raise their beers and cheer at the cameraman.

You would think that the above scenarios are descriptions of two different events. They are two different news items—but they are images of the same Melbourne Cup, that horse race that apparently stops a nation.

Several years ago, I was teaching a group of year ten students to analyse the news. The previous evening, I had recorded the news across several television stations and, as it happened, they had all included reports about the Melbourne Cup, which had run that day. I have no recollection of which horse or jockey won, but I do remember the stark contrast between two of the stories. One gave the impression of a glamorous and fashionable must-attend event, while the other portrayed a drunken day out.

I wanted my students to see that selection of detail, camera angles and other editing choices impact how we interpret the news, which we often assume to be fact. I just hadn’t expected it to be quite so obvious.

As a teacher, I was aiming to develop students’ analytical skills. I hoped they would learn to see the way texts are constructed, to identify how they as readers and viewers are being positioned and encouraged to respond. Ultimately, I wanted them to become ‘critical thinkers’.

It’s this notion of thinking critically that bothered me most when Facebook banned Australians from posting or accessing news content last month. It was a reminder that we (myself included) often consume news and other information without thinking critically about what we’re reading or viewing (not to mention the power of both social media companies and media moguls to shape the narratives we receive).

Our social media content is highly curated, with an algorithm designed to feed us more of what it thinks we want to see and hear (and keep us on that platform as long as possible). The effect is that we end up in echo chambers that merely confirm what we already believe.

Try this: start watching cat videos for a day. Guess what will turn up with increased regularity tomorrow?

Social media is also a place where opinions are frequently espoused as if they are fact.

Yes, there are facts. But there is a difference between credible, verifiable fact and opinion.

Believe it or not, is possible to have alternative opinions and perspectives, without one person having to be right and the other wrong. Have you ever listened to two adult siblings recall an event from their childhood? There will be some facts in common, but each will have their own memories of what they saw and heard, not to mention their individual interpretation and meaning of that same event. And think about the images in those two news items about the Melbourne Cup. Neither were incorrect exactly; it’s just that on their own, neither portrayed the whole story.

Contrary to what Donald Trump might like us to think, however, alternative facts are not actually facts. They are either misinformation, fabrication, fiction—or they are an opinion.

‘We do not listen to understand. We listen to reply.’

Sadly, the art of respectfully expressing and/or listening to a different opinion seems to be a dying art. As Stephen Covey suggests, ‘we do not listen to understand. We listen to reply.’

When differing points of view are expressed, it often becomes a shouting match, with the loudest voices doing their best to shut down opposing views. It seems that instead of discussing or even challenging an issue, it’s easier to attack the person, resorting to the school yard tactics of name calling, threats and exclusion.

To paraphrase something author and commentator Jane Caro said at the Perth Writers Festival several years ago, resorting to name calling (whether or not it feels justified) shuts down debate rather than opening up a discussion.

Questions about credibility and reliability

Returning for a moment to my year ten students and their news analysis of the Melbourne Cup, there are a number of questions that help assess the credibility and reliability of the texts we consume:

We don’t need to be English students with a homework assignment to ask these. In a world where misinformation and even disinformation** seem to be occurring with alarming regularity, these are questions we all need to ask.

* Despite the negative connotations of the word ‘critical’, being a critical thinker doesn’t mean simply finding fault in something. According to Monash University, critical thinking is ‘a deeper kind of thinking in which we do not take things for granted but question, analyse and evaluate what we read, hear, say, or write’.

** Misinformation is any misleading information, although it may be unintentional such as repeating a misheard quote or taking something out of context. When people are spreading misinformation, they may do so believing what they are saying. In the case of disinformation, information is supplied with the deliberate intention to mislead. (The VOA Learning English website offers a good explanation of the difference and includes examples.)