Looking for the Helpers 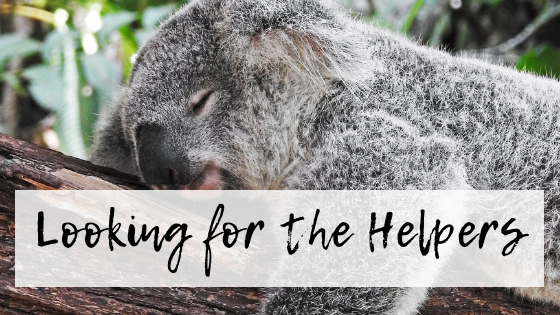 I don’t know about you, but I’m often disheartened by all that’s wrong in our world.

War mongering leaders who care only about securing their own wealth and power. The apparent increase in Orwellian-like surveillance and data collection. Our treatment of refugees or anyone ‘different’ to ourselves. The increase in fake and misleading news. A propensity to troll, name call and invoke a digital pile-on on anyone who dares to hold a different view to our own. And, of course, the impact of so-called natural disasters such as the recent floods in Indonesia and Australia’s bushfires.

Any one of these can traumatise those directly affected, and leave those on the sidelines helpless to know how best to help or make any real difference.

Look for the Helpers

Yet, as in the case of the recent bushfires, there are so many stories of people wanting to help. And I don’t mean those who give out of their wealth, hoping for publicity and kudos, but ordinary people doing what they can with whatever skills and finances they do have.

I’m reminded of a well-known quote by American television personality, Fred Rogers, who hosted the preschool series Mister Rogers’ Neighbourhood from 1968 to 2001: 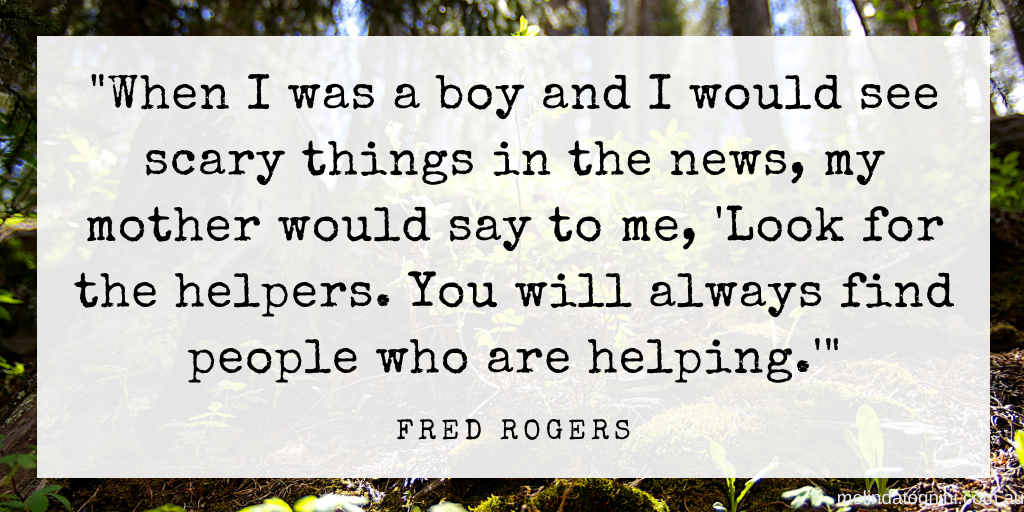 He went on to say:

“To this day, especially in times of ‘disaster’, I remember my mother’s words and I am always comforted by realising that there are so many caring people in this world.”

He included doctors, nurses, police, firemen, volunteers, neighbours and friends in his list of possible helpers. We may not all be a firey on the frontline, but we are often a neighbour or a friend, and we can all be a volunteer (although this comes with a caveat).

While Roger’s advice was originally aimed at preschoolers, designed to ‘divert a child’s distress towards safety’, and it was only one part of an 8-point plan to help kids deal with tragedy, I believe his words do have relevance to all of us.

“If you look for the helpers, you will know that there’s hope,” Fred Rogers explained.

Not only does looking for the helpers offer me hope in the wake of such events, it offers practical ways I can play an active part.

In the immediate aftermath of the Australian bushfires so far this summer (there’s still more summer to come!), there were so many stories offering practical examples of kindness, empathy and practical help.

* the group of tradies planning to donate their skills and time to help rebuild fire affected towns. They’ve set up a website for anyone wishing to be part of this;

* the man who would finish work and go door knocking because as a refugee, he knew what it was like to lose everything;

* people caring for injured animals, including a makeshift koala shelter in the Adelaide Hills;

* the 11-year-old who put together toiletry packs for those affected by the fires;

* the group of Muslim women who raised $1,500 in donations and 5 trucks full of supplies before travelling over 4 hours to deliver them;

* the Auslan interpreter making sure those in the Deaf community had access to the latest updates;

* the Spend with Them Campaign, set up by motivational speaker Turia Pitt and colleague Grace McBride, to encourage people to support local businesses as they rebuild;

* my friend, who joined others to crochet nests and blankets for bushfire wildlife rescue, and a group in New Zealand embarking on a similar initiative;

* the two boys raising money via a lemonade stand (and the police who directed traffic to it);

* the six-year-old US boy who raised thousands of dollars by making and selling clay koalas; and

* a group from the Victorian Hazara community who have raised almost $160,000 to the state’s bushfire relief efforts and offered up its members who have tradie skills to help rebuild communities.

And of course I need to give a special shout out to the incredible writing and reading community, and the #AuthorsForFireys campaign. When authors Emily Gale and Nova Weetman sent out a call on twitter for donations of books or services, the writing community got creative (naturally). Items ranged from signed books, to mentoring and manuscript critiques to dinners and visits to book clubs. One Perth librarian even donated 11 x $200 to help other aspiring writers with their bids for a mentor. Emily and Nova would have been happy if their efforts had raised $20,000. The total? As of 19 January, $530,000 had been pledged, with $486,000 confirmed.

Knowing When and How to Help

These really are just a small snapshot of ordinary people stepping up and giving in diverse ways.

Author Jackie French, who lives in the Araluen Valley and evacuated during the fires, wrote an article for the Age while she was still living out of suitcase, saying, in part, “Focus on what you can do. Don’t cry for what you can’t.”

But here’s where the caveat comes in.

Sometimes we can offer help in a way that makes us feel good but doesn’t actually offer the assistance best suited to those who need it.

For example, there’s often a rush to donate clothing and household items to disaster relief, but in the midst of the crisis, this simply overwhelms charities, who quickly run out of room to store it, and do not have the human resources needed to process it all. An alternative is registering with a group such as Givit, who coordinates a digital database of goods, while you keep hold of the items until they’re actually needed.

Earlier, I mentioned my friend who was helping crochet animal pouches. While these were welcome initially, one of the groups she put me in touch with has since said they’ve had such an overwhelming response that they have more than enough. Any more may give the makers a warm fuzzy, but they won’t be useful right now.

Even when it comes to something like offering emotional support and counselling, it’s important to know when and how to send trauma counsellors to fire affected communities. While there is certainly a need for people to debrief, evidence suggests that doing so too early can actually re-traumatise those on the receiving end.

The best way to help may simply be to send money. Lindsay, from Treading My Own Path, has created a useful list of where to donate money (and other items). Remember, too, that although some organisations may appear to be slow with the distribution of collected funds, it may be because they’re aware of not only the short term need, but the long recovery ahead.

When the Crisis is Over

After the flames have died down, and the smoke finally stops smoldering, those of us not personally affected are likely to move on from our feel-good moments and return to our usual routines. However, those directly impacted will continue to deal with the aftermath. There is trauma, loss and grief, not to mention the financial and practical implications of trying to rebuild.

While interviewing war widows for my book, Many Hearts, One Voice, a common thread through their story was about the period of time after the loss of their husbands. One war widow told me:

‘… you’ve got everybody with you at first and then they go home … in the first twelve months, you are in this haze and just allow life to go by you.”

It wasn’t until the second 12 months, that she thought, “Oh yeah, I am paying bills, I guess I better look at all this stuff and start working my own life and getting organised.”

Writer Andrew Hutchinson grew up in Kinglake, which was devastated by the 2009 Black Saturday fires, and writes movingly not only about the immediate loss and destruction, but the long-term impact on those involved. He offers this advice:

“… if you know of anyone in the impacted areas, please reach out to them and let them know that you’re there, and that you’re ready to listen if ever they need. It’ll also be important, at some stage, that people look to head back to the coastal areas, in particular, to visit, as towns which are largely reliant on tourist income have also been hit by this crisis.”

“Definitely, people have a right to demand answers from the government as to its lack of action in this respect, but make sure that anger doesn’t overtake the need to consider the humanitarian impact, which will stretch on for lifetimes.”

Previous 7 Tasks for Memoirists and Family Historians to Kick Start the Year
Next 6 Degrees of Separation: From Fleishman is in Trouble to We can Make a Life