Monkeying Around: In Conversation with Asta Lander 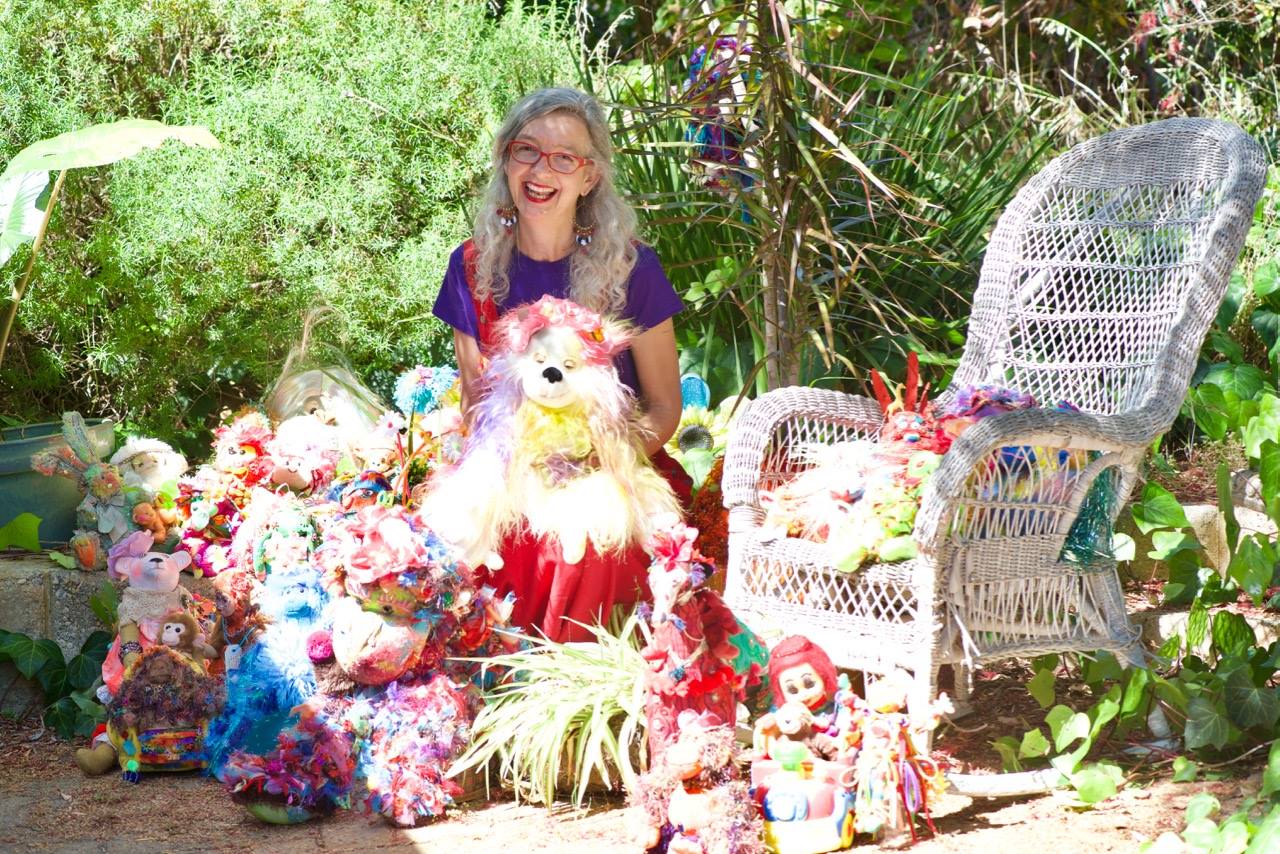 Asta Lander is a Perth artist and creative mentor, whose exhibition, Monkeying Around, opens at the Victoria Park Centre for the Arts on Friday 2 December 2016.

Asta has worked as a school art specialist, volunteer art therapist, a primary and ESL teacher, and a school chaplain, but says she ‘skirted around’ her artistic self for many years. Only as she approached her 50th birthday did she question her previously held beliefs about failure and fully embrace herself as an artist.

If you’ve ever experienced self-doubt, or considered giving up on your creative dreams, Asta’s story will encourage you that it’s never too late to reconnect with that side of yourself.

Asta, where do you think your creativity originated?

Most likely from my mother, who was a junior primary teacher. I vividly remember cutting out people, animals and houses from bright, shiny paper, and making collages in brown paper scrapbooks. She painted a mural on our bedroom wall in our old farmhouse on the outskirts of Narrogin, and then when we moved into town, she allowed me to draw angels on my powder blue walls. If felt such a sacred act. I always drew and painted as a child, and I was an avid reader.

For a brief time, I had a wonderful, young art teacher, who privately allowed me to call her Barbara, and would invite me her home so we could create together. Mrs Richie was our ‘elderly’ teacher and the main teacher of my high school years. She was involved in a craft group in town. It was not generally where teens hang out, but I used to visit, and it was there I learned to spin wool and weave. I thank God for them both. They believed in me.

So, what changed for you?

In high school, the teachers expected big things from me, as I was considered one of the top art students. But when I sat the TEE, my results were average. What surprises me all these years later is that I thought ‘average’ meant failure. I wasn’t kind enough to also understand that in the country, especially then, we had limited resources, experiences and exposure to other artists’ work.

And because I thought I’d failed, I wouldn’t paint.

After qualifying as a primary teacher, I initially worked as an art specialist, where I got to ‘play’ with students. When I became a mother, I enjoyed creating reading cubbies and after school activities with my children. I painted a magic blanket for them, and created no end of craft bits and bobs to give as gifts and sell at market stalls in craft shops. BUT I wouldn’t paint. Not really. I painted a boy fairy mural on our first son’s wall, and later a mural on our hall wall, but nothing on paper or canvas – with one exception. I painted dragonflies on small canvasses and sold them at the local farmer’s markets. All proceeds went to a little girl affected by the Chernobyl nuclear disaster.

What turned things around?

When we went back to live in Narrogin (where my husband became Deputy Principal at the school I’d attended as a student), I saw things in a new light. I was turning 50, and wondering what was holding me back from what I loved to do. Had I really failed? Was I really a terrible artist?

I sat with a friend, over glass of red wine in front of the fire, and cried and cried about that pain. Something was released. I then discovered an artist called Lucie Walker, and her website Happy Accident Art. I did what she suggested. I took a large sheet of paper, plonked it on the floor, and with the bright colours I love, I just swirled away. I played.

And that was that. I found myself again. When we returned to the city in 2013, I decided to pain one painting a day for a year.

What was the outcome of that process?

My skills improved. It taught me discipline and it grounded me after the move.

I’m embarrassed by a lot of my earlier work, but at the same time it gives me joy to see how far I’ve come. I also remind myself that this isn’t about proving myself to anyone, but about expressing something deep within me. I cannot not create. Without it, I feel a deep grief.

I was commissioned to paint a large angel in acrylics for the offices of an obstetrician. I also created a large painting of two hands pointing towards heaven, purely as therapy to express what I experienced at my father’s death. I’ve now shared the painting and many find it gives them hope. I’ve been commissioned to paint pet portraits, and donated pieces for animal rights/rescue. Twice now I have had the privilege of seeing my art on wine bottle labels – for greyhound rescue and for humane research.

And, now, you’re holding an exhibition – why Monkeying Around, and why ‘altered’ monkeys?

I wanted a fun title for a serious issue. And altering monkeys is truly monkeying around … it’s playing. What better fun can there be than wielding a glue gun and letting yourself loose with pom poms, old jewellery, bits of tinsel, buttons, googly eyes and fluro paint?

The idea came about after altering a toy giraffe and pondering how else I could help Humane Research Australia’s Ban Primate Experiments Campaign. Op shop monkeys are affordable, they need rescuing (who can resist those faces and tails), and I’m giving new life to old objects that others have discarded because they’re past their usefulness. Perhaps my monkeys are partly influenced by The Velveteen Rabbit.

Giving them a second life is symbolic of my prayer for primates currently being bred and experimented on in Australia, as well as those imported. My prayer is that they, too, will be given the chance of a second life in a sanctuary, animal experimentation will be replaced with humane methods, and all the monkeys will be free to truly monkey around!

No, sadly it hasn’t. In Australia, six million animals are used in experiments for research and teaching each year. We hear a lot in the media about cosmetic testing and advances there, but little is said about scientific research in other areas. Most don’t know that three breeding facilities exist in Australia, let alone the fact they’re partially tax-payer funded.

I believe your also a supporter of re-homing greyhounds …

Six thousand dogs are used for experiments and teaching in Australia, including greyhounds discarded from the racing industry. One of mine was rescued after breaking a hock. It brought an end to his career and could easily have been the end of his life. I twas told he was the only one spared from that owner. The other was unable to race as a one-year-old and was rescued from euthanasia.

When your not altering monkeys and rescuing greyhounds, what might we find you doing?

My other big passion is for orphans in Indonesia with HIV/AIDS. Next year my focus will be on raising awareness about the plight of Rumah Lentera in Solo, Indonesia. I hope to crowdfund, to raise money to build the children a house of their own. They have been rejected from their communities, and as they currently live in a rented house, they are always at risk of being run out of their neighbourhood. Singer/songwriter Jade Diary has written a beautiful song for the children and all who are helping them to achieve this dream.

What brings you joy?

Colour. Creating. Authentic conversation and genuine connection with people. Living compassionately – in particular veganism and openness to the ‘other’. A new book. Finding treasures in an op shop. Helping unblock a creative person by reminding them how to play. Family dinner nights, my husband’s undivided attention, dates with my kids. My rescued greyhounds and hand-reared cat. My faith and spiritual practices as a Franciscan Christian. Church candles and liturgy, and stained glass windows. Bird song. The moon. Walking the labyrinth. Animals and children – they lead the way and remind me who I was always called to be.

And you’ve worked with groups of children in the lead up to the Monkeying Around Exhibition, haven’t you?

I’ve worked with a small class from Yule Brook College, who gave some of my monkeys stories. These are now on luggage tags around the monkeys’ necks, a bit like Paddington. Victoria Park Primary Scho0l students responded by exploring issues facing primates, as well as creating their own art, which will be on display. A handful of other artists have also responded with their own art. I want it to be inclusive, and would love exhibition visitors to bring flowers, preferably handmade, to symbolise the freedom we hope for these monkeys.

Monkeying Around opens at the Victoria Park Centre for the Arts from 5 pm on Friday 2 December 2016 and runs until 6 December.

Previous 7 Writing Prompts Inspired by Music
Next A Time to Remember: 70 years of the War Widows’ Guild in Western Australia