6 Degrees of Separation: The Narrow Road to the Deep North 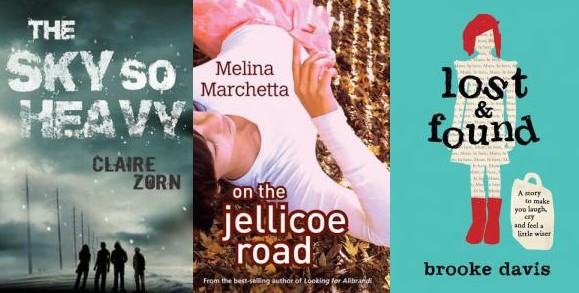 Welcome to Six Degrees of Separation, where authors Emma Chapman and Annabel Smith provide the name of a book and invite us to link it to six other books in any way we choose. This month’s chain begins with The Narrow Road to the Deep North by Richard Flannagan, which won the Man Booker prize this year.

I’m a little unsure how I will cope with it given the subject matter. At the same time I’m keen to read it as several women whose stories I have been writing are the widows of prisoners-of-war.

Another book on my To Read list is A Wrong Turn at the Office of Unmade Lists by Jane Rawson, which recently won the Most Underrated Book Award. This novel is set in a futuristic Australia that is difficult and brutal, as is Annabel Smith’s latest novel The Ark. Both books could be classified as dystopian fiction, which has become increasingly popular, especially among teens.

In that case, I can’t go past the Tomorrow When the War Began series by John Marsden, which was perhaps ahead of its time when it was first published 20 years ago. A group of teenagers return from a camping trip to discover that Australia has been invaded by a foreign country. They go to extraordinary lengths to not only survive but to fight back against the enemy.

In Claire Zorn’s The Sky so Heavy, the teenage protagonists are fighting for survival too, this time after a nuclear fallout. The narrator, Fin, hopes they will reach safety by locating his mother, but things don’t turn out quite as he hopes. In On Jellicoe Road by Melina Marchetta, Taylor is also searching for her mother, and for the answers as to why she was abandoned on the Jellicoe Road.

Another character on a journey to find her mother after being abandoned is seven-year-old Millie in Lost and Found by Brooke Davis. When she meets Agatha Pantha and Karl the Touch Typist, the three set out together, and what began as a story of loss becomes one about what it means to belong.

As you can see, I very quickly moved from war in our past to imagined conflict and war in our future to loss and abandonment, which are also stories about friendship and belonging. Thank goodness for that – it was all sounding pretty grim there for a while.

I’d love to hear where your Six Degrees of Separation led you. And be sure to check out where it led Annabel Smith and Emma Chapman.