Five Faves: Writers from the West 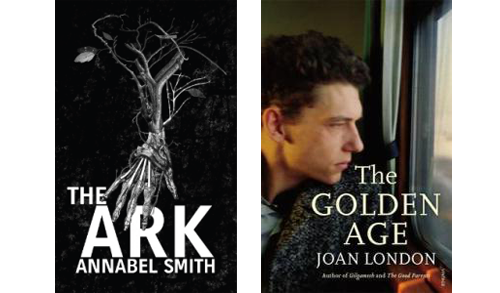 I’ve heard it said that Western Australia’s isolation disadvantages our writers and artists. Yet there is so much creative talent here that I believe I could spend 2015 reading writers from the West, and still not finish a long list of great books. For now, though, here are five books (and their writers) that I read in 2014 and wholeheartedly recommend:

The Ark by Annabel Smith

Annabel Smith has created a scarily plausible world in The Ark, which is set later this century in a post peak oil Australia. An underground bunker, aka the Ark, has been established to preserve thousands of the world’s seed specimens. As violence and lawlessness (known as the Chaos) increase, 26 people consisting of Ark employees and their immediate families lock themselves in the bunker to protect themselves and the seeds.

The novel is structured as a series of documents, including new forms of communication as imagined by the author. It is as though we are privy to the archives that have been recovered decades later. This unconventional but intriguing narrative structure enables the inclusion of multiple points of view, and immediately raises doubts about whose perspective can be believed and trusted.

The Ark  is available both in paperback and as an interactive e-book, with its own app that allows you to tour the bunker, read blog posts about life inside and news articles about the world outside. Readers can even contribute comments and fan fiction.

The Golden Age by Joan London

Joan London’s latest novel provides a picture of post-war Perth. After arriving with his parents as refugees from Hungary, 13-year-old Frank Gold contracts polio and is sent to the Golden Age Children’s Convalescent Home to recuperate. While The Golden Age is a work of fiction, the Home was real, situated in the suburb of Leederville from 1949 to 1959. Sadly, it has long disappeared to make way for a freeway.

During his stay at the Golden Age, Frank meets 12-year-old Elsa Briggs, and the novel explores their burgeoning friendship, the notion of belonging, and the potentially devastating effects of polio – now eradicated in Australia thanks to immunisation. It is also fascinating to read about the experiences of post-war refugees like Frank and his parents, particularly given the current attitudes and political climate in our country.

Lost and Found by Brooke Davis

You may have ‘met’ Brooke Davis on Australian Story earlier this year. If so, you will have heard her remarkable story of writing and publishing her debut novel, Lost and Found.  The narrative revolves around young Millie who counts Dead Things, Agatha Pantha who hasn’t left her house in years and Karl the Touch Typist who escapes from a nursing home. It is certainly an odd trio that embarks on a road trip to find Millie’s mother.

At times, Millie appears much older than her seven years, but given the neglect she has experienced, it is likely that she has been forced to become more resourceful than other children her age. Overall, I loved the quirkiness of the characters and grew rather fond of them all. I certainly wasn’t ready to farewell them when I reached the final page.

Taking a Chance by Deborah Burrows

While much has been written about the Second World War, most of it has been about the men who enlisted rather than those on the home front. Deborah Burrow’s novel Taking a Chance (and her previous novel A Stranger in My Street) seeks to change that. This action packed crime/romance novel is set in the inner suburbs of Perth in the days of the visiting American servicemen. Johnny, a Captain with the American Press Corps, convinces local girl and newspaper journalist Nell to help him find the truth behind his ex-lover’s murder conviction. As they investigate further, they discover a seedy side to war time Perth.

I gave A Stranger in My Street and Taking a Chance to several war widows, who were young women during the Second World War. The consensus was that the descriptions of place, atmosphere and activity in war time Perth rang true for them

The Break by Deb Fitzpatrick

The Break was my surprise novel of the year. It hadn’t even been on my To Read list, until I bought it ahead of an author talk I was attending. I was hooked by part way through the first page, and then devoured it until I finished the final chapter.

Hoping for a sea change, Rose and Cray move from the city to Margaret River on WA’s south-west coast. There, Liza and Ferg run the family farm, together with their son Sam, and Ferg’s mother Pip. The lives of the two families initially run parallel, but their paths cross when the coastline is threatened by developers.

The earlier parts of the story are told relatively gently, but it is beautifully crafted, with exquisite phrases and descriptions, seemingly without a word wasted. Then tragedy strikes, dealing the characters – and this reader – a devastating blow. I can’t wait to see what Deb Fitzpatrick writes next.

If you liked the sound of these Five Faves, keep an eye out for my next post for more great books, this time those on my holiday reading list. You might also like to check out Amanda Curtin‘s four part series, The Next Wave: WA Women Writers to Look Out For.

I’d like to know: which books from the West would you recommend? If you don’t live in Western Australia, is there a writer in your local area that you think we should check out?

Previous 6 Degrees of Separation: The Narrow Road to the Deep North
Next Summer Holiday Reading