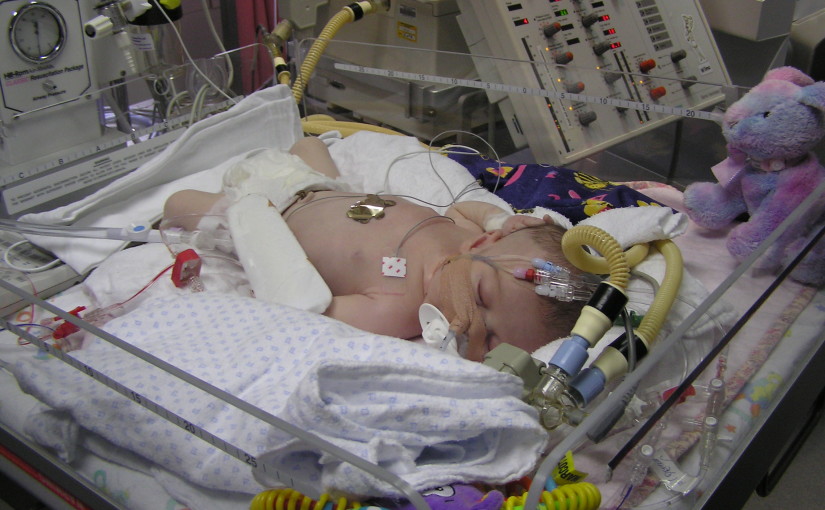 Valentine’s Day began as a day to honour at least one Christian martyr named Valentine, said to be executed on 14 February in ancient Roman times. These days, it’s better known as a day of love, and is big business for many in the retail and hospitality trades. Last year, Australia spent approximately $790 million on Valentine’s Day, including gifts, romantic dinners and getaways.

International CHD Day is very close to my heart – or more accurately, my daughter’s heart.

During my pregnancy, a routine ultrasound revealed that our unborn child had severe heart defects. Doctors gave her only a 50% chance of reaching adulthood; her quality of life and life expectancy could not be guaranteed. We were presented with a grim choice: proceed with the pregnancy or abort.

Momentarily, we wondered if it would be easier to end it rather than begin to love her and then lose her. But I knew from friends’ experiences that grief is difficult no matter when you lose a child. Besides, she had some chance. If we terminated the pregnancy, we gave her none.

I was numb as we walked out of the hospital that day. The disbelief soon gave way to grief, anxiety and fear. We survived on the support and prayers of family and friends – and complete strangers who heard our story. Some days we felt strong and full of hope. Other days, I couldn’t stop crying.

Minutes after she rushed into the world, she was whisked away to the special care nursery. The following morning she was transferred by ambulance to our city’s only children’s hospital. At six days old, she underwent her first life saving surgery.

Nothing prepares you for the first glimpse of your child lying motionless on a bed in ICU. She’s hooked up to tubes and drips and machines that flash and beep. Her face is obscured by the tape needed to hold the breathing tube in place. On either side of her, other children are also fighting for life. For a time, it feels as though you are living in a parallel universe, as if nothing exists outside these hospital walls.

One of the things that buoyed me during that difficult time was a visit from Cecilia, a fellow Heart Mama and support worker for HeartKids, an organisation established to support families affected by CHD. She shared the story of her own daughter’s journey with a similarly complex heart condition. Shakira was nine at the time and it gave me hope that my baby might reach that milestone.

There’s a great deal more to our story, and my daughter’s heart journey is far from over, but that will have to wait for another time. I will say that she has now passed that milestone and is heading towards her 11th birthday. As for Shakira, she recently celebrated her 19th birthday and has established her own business running children’s parties. You can read her story in my next post. But sadly, I’ve also farewelled a number of Heart Angels, who grew their wings way too soon.

HeartKids continues to offer emotional and practical support to many families, as well as raising funds for important research into the causes and treatment of CHD. We have met some amazing families and incredibly courageous kids. Some are further along the journey than us, others are just beginning that difficult road.

So, this Valentine’s Day, how about ditching the flowers and chocolate and consider supporting the HeartKids ‘Show Your Heart’ campaign instead? You’ll be helping to raise much needed support for our brave HeartKids and their families. Check out the HeartKids website for ways you can make a real difference in the lead up to Valentine’s Day.

And if you and your family have been been affected by CHD, and would like support, check out the  HeartKids Australia website for information and contact details in your state. Or leave me a message, either here or on my Facebook page and I’m happy to have a chat, or connect you with someone at HeartKids. In Northern Ireland, the Children’s Heartbeat Trust offers similar support. And if you live elsewhere, please let me know of any similar support groups in your part of the world.