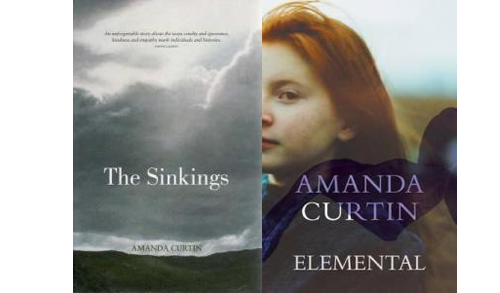 In my previous post, Five Faves: Writers from the West, I shared the names of five books (and their writers) that I enjoyed this year. But there are so many more on my To Read list, and I seem to be adding titles faster than I can finish them. Here are just a few of those I hope to read over this summer holiday period – and if you’re in the Northern Hemisphere, what a great excuse to curl up and escape the cold for a few hours.

Finding Jasper was published in 2012, but I have only recently discovered this novel. Jasper was a pilot in the Second World War, but never returned home; however, he continues to be a presence in the lives of his wife, daughter, sister and mother.

The novel is divided into three parts. The first is set in 1956, when 12-year-old, Virginia (Gin) arrives in the South West of WA to stay with her aunt. There, Gin hears stories of her father who died shortly after her birth. The second part travels back in time to the war, when Gin’s parents, Valerie and Jasper, meet and fall in love, only to have him killed in action. Finally, in 1963 Gin is 19 but still affected by her father’s absence.

If I Should Lose You by Natasha Lester

Camille is an organ transplant coordinator, supporting families as they make the agonising decision of whether to donate their loved one’s organs. Her mother was a heart surgeon, and now her own daughter is seriously ill and requiring a liver transplant.

The issue of organ donation certainly warrants greater discussion and support in Australia. And having experienced first hand the emotions, stress and uncertainty of caring for a seriously ill child, I’m intrigued as to how Natasha Lester deals with this subject.

Elemental and The Sinkings by Amanda Curtin

Although Elemental by Amanda Curtin has been on my reading list for some time, and has had wonderful reviews, I also want to read her debut novel,
The Sinkings, set in and around Albany on Western Australia’s south coast in the late 1800s. When human remains are discovered, an autopsy reveals the remains are those of a woman, but the victim is identified as Little Jock.

This is a novel that explores the lives of those born inter-sexed; I have often wondered whether this might be an explanation for an ancestor who grew up as a girl, but whose original birth registration bore the name of a boy, before being legally altered.

As the title suggests, When War Came to Fremantle tells the story of the port city of Fremantle in Western Australia, focusing on its links and interactions with war, from the Boer War to the end of the Second World War.

With commemorations for the centenary of the First World War underway, books about war history will be in abundance. However, they tend to focus on battles, battalions and the men who served in them. So it is refreshing to see a book that also includes the impact of those on the home front.

Not only is the book beautifully presented, including many archival photographs, a cursory glance indicates it will be a good read, too.

For the Kids (of all ages)

Zac and Mia meet in hospital while undergoing treatment for cancer, and each of them has very different ways of dealing with their diagnosis and treatment. There has been the obvious comparisons to The Fault in Our Stars, but my understanding is that Zac and Mia has a very different feel to it.

A J Betts has a great deal of experience teaching in the hospital system, giving her special insight into how young people deal with life-threatening illnesses. I bought a signed copy at the Perth Writer’s Festival earlier this year, only to misplace it after loaning it to a friend. So, I’m still hanging out to read it.

The Mapmaker Chronicles: Race to the End of the World by A L Tait

Set in a time when the Earth was thought to be flat and dragons might devour you, 14-year-old Quinn is chosen to be the mapmaker for a ship racing to chart the globe. Although his brothers long for adventure, Quinn would be content with a quiet life. Still, he packs his bags and heads to sea, unsure of the dangers that await him.

Race to the End of the World is the first book in The Mapmaker Chronicles, with book two available in April 2015.  I am not sure whether I’m buying this for my kids, or whether that’s just a ruse so I can read it myself.

Nona and Me by Clare Atkins

This book is a late addition to my list, as I only discovered it this week. Nona and Me is about two girls, Rosie and Nona, one white and one Aboriginal, who are best friends until Nona moves away from the community in which they live. When she returns several years later, much has changed and the friendship is under strain.

Clare Atkins wrote this story while living in North East Arnhem Land, where I grew up, and to which part of me will always belong. I still have vivid memories of attending high school in the mining town, although many years before the Intervention. I’m really interested to see the similarities and differences between the girls’ experiences and my own. I may end up being slightly jealous that I didn’t get to write this story.

Have you read any of the books listed here? If so, what did you think? And what’s on your Summer Reading List?

Previous Five Faves: Writers from the West
Next Valentine’s Sweetheart: Make a Difference this Valentine’s Day