6 Degrees of Separation: The Casual Vacancy 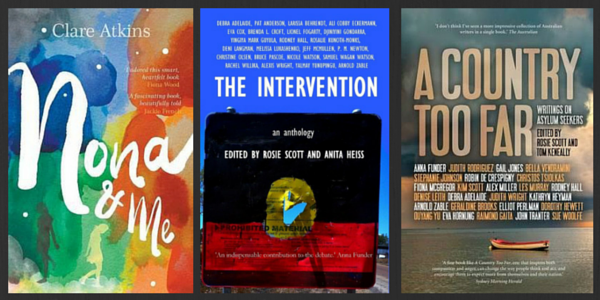 Welcome back to Six Degrees of Separation, a literary meme created by Annabel Smith and Emma Chapman in which we link a book to six others in any way that comes to mind. This month begins with The Casual Vacancy by J K Rowling.

For me, this is about leaving a space for Indigenous authors to tell their own stories.

The Casual Vacancy is set in a small English town. Nona and Me by Clare Atkins is also set in a small town, although on the other side of the world in Arnhem Land, in the Northern Territory. This novel explores the evolving friendship of two girls, Nona and Rosie, one Aboriginal and one white.  In writing Nona and Me, Atkins focuses on Rosie’s perspective and recently wrote about why we don’t hear the story from Nona’s point-of-view. Among a range of reasons, she says:

For me, this is about leaving a space for Indigenous authors to tell their own stories

A book that will enable us to hear Aboriginal perspectives is The Intervention: An Anthology, to be launched in Sydney on 1 July and in Darwin on 4 August 2015. Edited by Rosie Scott and Anita Heiss, it includes work from Aboriginal and non-Aborginal writers, such as Ali Cobby Eckermann, Rosalie Kunoth-Monks, Melissa Lucashenko, Bruce Pascoe, Alexis Wright, Yalmay Yunipingu and Arnold Zable.

Another anthology Rosie Scott edited, this time with Thomas Keneally, is A Country Too Far: Writing on Asylum Seekers. This is an extraordinary collection with contributions from a wide range of Australian writers and provides a voice for a group of people who, I believe, have been unfairly demonised and dehumanised in recent times.

Thomas Keneally also wrote A Widow and Her Hero, about a young Australian woman widowed during the Second World War. I read this shortly after it was published in 2008, as I embarked on my research about war widows. Now as my book enters the final stages of production prior to its release in November, I want to re-read Keneally’s novel to see how the experience of his widow sits with the stories I have been privy to over the past seven years.

A book that became invaluable to me during my research is On the Homefront: Western Australia and World War II, edited by Jenny Gregory. As the subtitle suggests, this non-fiction book explores various aspects of life for those who remained at home during the Second World War.

On the Homefront contains several chapters about the early post-war period, including the experiences of those arriving in Australia after being displaced by the conflict. One of the characters in Joan London‘s The Golden Age  is a young boy named Frank who flees Hungary with his parents and seeks refuge in Perth.

From a small English town to the Australian outback, to voices often silenced in our country’s dominant narratives and ending on an exploration of the Second World War and its far reaching consequences.

I love seeing the different connections that can be made from the same starting point, so if you’re playing along, please provide a link to your blog post, or simply include it in the comments section of mine. And don’t forget to check out where Annabel Smith and Emma Chapman ended up. If you’ve never played before but think it could be fun, then check out the guidelines below and let me know how you go!