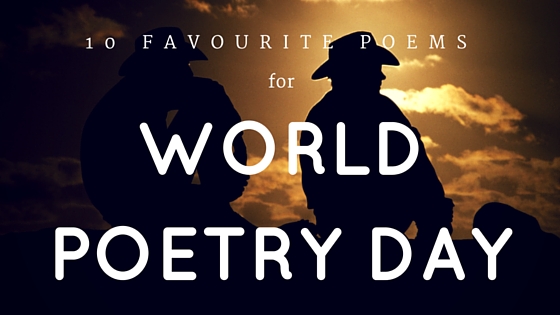 With World Poetry Day just around the corner, I’ve been thinking about the poems that have stayed with me long after I first discovered them. Some have become favourites because of the poets’ language choices, others because of the memories associated with them. But all have remained significant in some way.

Here are ten of my favourite poems, in no particular order. Rather than include them verbatim here, I’ve provided links to other sources, such as the Poetry Foundation and the Australian Poetry Library in an effort to respect copyright permissions.

1. The Road Not Taken by Robert Frost

‘The Road Not Taken’ by Robert Frost must be one of the world’s most well-known poems, and deservedly so. The image – and metaphor – of the two roads diverging in the wood has stayed with me since first hearing it in high school. But I’m also reminded of my childhood, of family camping trips to the Warren River in Western Australia. To reach our favourite campsite on the river, we took a 4WD track known as Petticoat Lane. When I picture the ‘road less traveled’, it is Petticoat Lane I imagine.

‘The Red Wheelbarrow’ was a ‘love at first read’ poem for me; something about its simplicity and the concreteness of the images drew me in. However, I know others who think that perhaps a poem should have more to it and it even led F. J Bergmann to write ‘The Apology’, which involves the narrator backing over said wheelbarrow.

3. The Man from Snowy River by Banjo Patterson

I cannot remember whether the poem or the film came first for me. With the film being released in 1982, either is possible. But it’s an Australian classic, and one often recited by poetry lovers.

I was initially fascinated by e.e. cummings because he was the first poet I read who (mostly) abandoned the use of capital letters. I love the the way he joins and separates particular words and phrases to give a sense of rhythm and pace when reading aloud. I especially love ‘mud-luscious’ and ‘puddle-wonderful’, which convey the playfulness and lightness of Spring.

5. The Owl and the Pussy-Cat by Edward Lear

Gerard Manley Hopkin’s poem is another that has been around for some time. Much of his poetry was not published until after his death in 1889. ‘Pied Beauty’ was written in 1877, but not published until 1918. The poem speaks of the beauty in ‘all things counter, original, spare, strange’. Gerard Manley Hopkins was writing about nature, but I’m also reminded of the variety and diversity among us, and my own desire to see that praised and celebrated.

7. ‘Stop all the Clocks, Cut Off the Telephone’ by W.H Auden

I know I’m not the only person who discovered ‘Stop all the Clocks, Cut off the Telephone’ by W.H. Auden (also known as ‘Funeral Blues’) after watching Four Weddings and a Funeral. Not only has this become a favourite poem, but the scene in which Matthew (John Hannah) reads it at the funeral of his lover has become one of my favourite scenes from that film.

8. ‘The Sycamore’ by Wendell Berry

‘The Sycamore’ is not so easy to find on-line, but I do recommend a read if you have the opportunity. It is both a nature poem and a moving metaphor for our own lives. While you’re searching for ‘The Sycamore, you can find some of Wendell Berry’s poems on the Poetry Foundation website, including ‘How to be a Poet’, which may interest any writers reading this.

9. ‘Our Deepest Fear’ by Marianne Williamson

I have a copy of ‘Our Deepest Fear’ on my wall in poetry form; however, it’s actually a short extract from Marianne Williamson’s book A Return to Love. Perhaps, then, some won’t classify it as a poem. Still, it speaks to me, so I include it anyway.

S. Nagaveeran is a relatively new poet. He turned to poetry and art as a way of dealing with his detention on Nauru after seeking asylum in Australia. He’s given me permission to reproduce ‘My Pen and Paper’ – the first poem he ever wrote – here on my blog:

I walk in a deep sadness path with my loneliness.

This emptiness makes me slow.

I fall to my knees and cry out loudly.

Tears knock silently at my eyes.

I can’t find anyone to share my pain with,

so I make friends with my pen and paper.

They cry with me.

The paper becomes wet with their tears.

If you’d like to know more about S. Nagaveeran and his work, then head over to his blog.

Perhaps you and I share some favourites, but perhaps you have some suggestions for me to explore. So please let me know: what poems would you include on a favourites list, and why have they stayed with you?