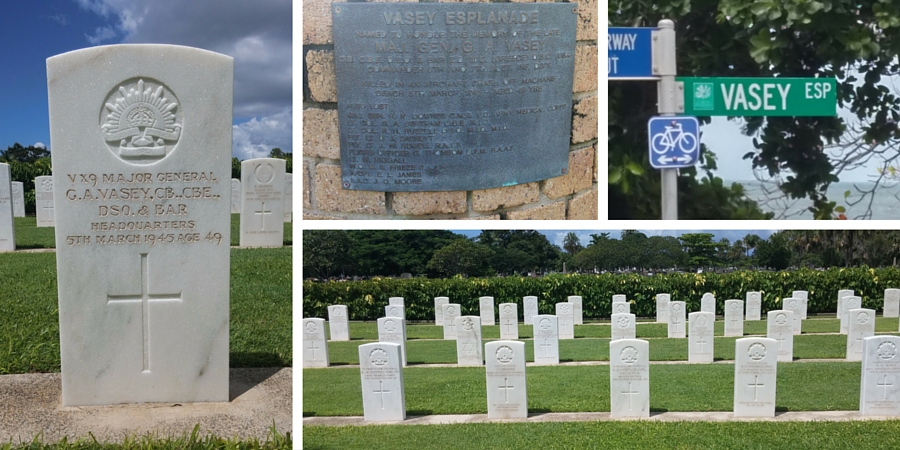 This time last week, I stood beside a stranger’s grave.

He felt like family. He wasn’t. Not even a distant relative or ancestor.

Let me backtrack a little.

My daughter and I spent Easter in Cairns, catching up with family and enjoying the tourist attractions. We walked through rainforest and ate fish and chips by the beach. We snorkelled with sea turtles on the Great Barrier Reef, and saw one-week old crocodile hatchlings swim in the Daintree River (they’re pretty cute if you ignore the fact they will one day be capable of eating you).

Our Trinity Beach apartment was on Vasey Esplanade, overlooking the sea. I’ve actually stayed on the same street before – 10 years ago – but back then the name Vasey meant nothing to me.

But context is everything.

Vasey Esplanade is named in honour of Major General George Alan Vasey. Major General Vasey died on 5 March 1945, when the plane transporting him back to the war front in New Guinea crashed just off Cairns. There were no survivors.

A decade ago, I’d never heard of Major General Vasey.

Because I hadn’t yet begun researching the story of his wife Jessie Vasey, or the organisation she founded.

I didn’t know he had supported his wife’s desire to help war widows long before she joined their ranks. He told her, ‘Stick to the war widows now and when I come back you shall have every atom of help I can give you.’

I didn’t know his encouragement propelled Jessie into action even as she grieved.

Her fierce determination started a national organisation that changed the lives of thousands of war widows after the Second World War, as well as those of future conflicts.

For Jessie Vasey, acknowledging the sacrifice of her husband and other men killed in service to their country was important. And she believed the war widows’ sacrifice should be recognised, too. The War Widows’ Guild had to fight simply to be officially represented at commemorative services such as Anzac Day and Remembrance Day. It wasn’t until 1956, and only after repeated campaigning and ‘badgering’ were war widows eventually invited to lay a wreath during the Anzac Day service in Canberra.

Jessie argued that war widows should be considered ‘chief mourners’ and encouraged other war widows to attend any service that remembered their husbands. ‘We must never allow this country to forget the debt owed its war dead,’ she told her fellow Guild members.

As we approach Anzac Day 2016, I’m reminded of various discussions and debates that arose during the centenary of Gallipoli. I heard arguments from those who questioned our obsession with the Anzac legend as well as those at the other end of the spectrum who loudly criticised anyone who didn’t wholeheartedly accept it. So decisive – and at times verbally violent – were some of those opinions that I lost the nerve to express my own.

But this isn’t about the Anzac legend. It’s not about glorifying or romanticising war or creating superheroes. It’s about attempting to understand the perspective of another.

Regardless of our views on war and Anzac Day, recognition and remembrance were important to Jessie Vasey. For her, this was personal. This was not some national myth, but her husband who she’d loved for 25 years.

Although her husband was buried in Australia, it’s my understanding she never saw her husband’s resting place. Just prior to her own death in 1966, she accepted an invitation to holiday in Queensland after 20+ years of dedication to the War Widows’ Guild. She apparently made plans to visit her husband’s grave, but for reasons unknown, the trip north to Cairns never eventuated.

And so, even though I never met Jessie Vasey – I wish I’d had that privilege – I wanted to somehow honour her by acknowledging her husband.

On our final day in Cairns, my father, daughter and I drove to the local cemetery. The military section was fairly easy to locate because, like other military cemeteries in Australia and across the world, it’s beautifully maintained.

We stood awhile beside the grave of Major General George Alan Vasey – and those of the other men who perished with him.

I’d like to think that Mrs Vasey would be glad we did.

Previous 10 Favourite Poems for World Poetry Day
Next 6 Degrees of Separation: A Prayer for Owen Meany