If you’ve been searching for Irish ancestors, then you may be under the impression, as I was until recently, that all genealogical records were destroyed in 1922 when an explosion and fire badly damaged the Public Records Office in Dublin during the Irish Civil War.

The destroyed records included Irish census returns, original wills dating back to the 16th century, and Church of Ireland parish registers containing baptism, marriage and burial records. However, not all records were lost, as you’re about to find out.

If you’ve been searching for Irish ancestors for a while, you may already have heard about some of these resources by now. Still, I share them in case they offer new research avenues for someone; they’ve certainly been immensely helpful to me.

Surviving records include all of the 1901 and 1911 Census records, as well as a small amount from 1821, 1831, 1841 and 1851. Thanks to the National Archives of Ireland, these are all available free on their website. While I haven’t had any luck with these earlier, partial records, the 1901 and 1911 keep on revealing new information about my ancestors.

For example, while most of the names on this 1901 census record match those in my existing family tree, I am also informed of their address, occupations and place of birth. If I want it, I can also access the names of their neighbours. Additionally, I have the name of a visitor, Sarah Crozier.

At this stage, I do not know how Sarah fits in, although I assume she is a relative of Mary Jane Rankin, whose maiden name was Crozier. Is she a niece, cousin, or a much younger sister? I won’t uncover this for some time after discovering this census record …

Civil records also survived the 1922 fire, and are now available on the Irish Genealogy website. Unlike sites such as Ancestry and Find My Past, the records on Irish Genealogy are free, although you do need to register your name and prove you’re not a robot. A cheap price to pay, given the information I’ve managed to uncover. The records available include:

The General Register Office are working to update further marriage records back to 1845 and deaths back to 1864. Hopefully, these will be included in future updates to the website.

Also available via Irish Genealogy are a selection of church records, which were added to the site in three phases. Although none of these were particularly relevant to my ancestry (different counties), they may be to your search.

If you happen to have an ancestor buried in one of the cemeteries covered by the Belfast City Council, you may find their burial record online.

The following records are available:

The online record provides the person’s name, date of death and burial, and last known address. What was particularly wonderful is that you can click on the grave number, and it will tell you who else is buried in the same plot.

For example, I tracked down my great-great-grandfather, Samuel Cunningham. 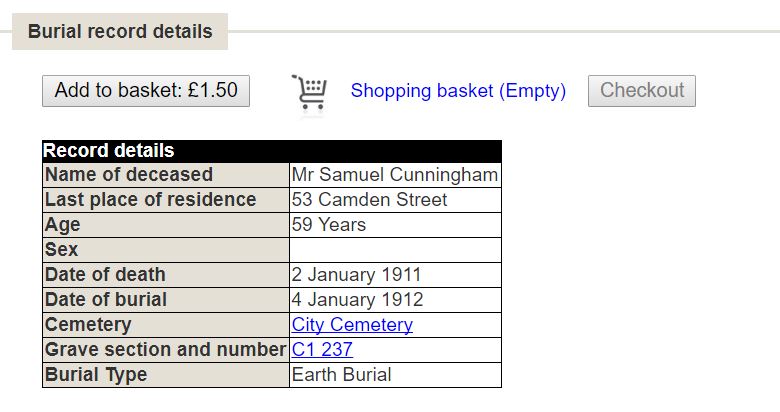 From the 1901 and 1911 census records, I knew he had a daughter from a previous marriage. I’d even found a marriage record on Irish Genealogy, as well as birth record for a daughter, but these had all been sitting in my ‘possible but no evidence’ folder for many months. Now, though, the cemetery records reveal that Samuel was buried with his first wife, Agnes, the name on the marriage record I’d found. In addition, three daughters from that marriage (two I had not known about!) were also buried there.

This sent me back to the civil records on Irish Genealogy, where I found more birth and death records, confirming this new information.

As you can see from the above image, you can also order the actual burial record for £1.50, which sometimes offers additional information such as cause of death and who owns the plot.

Unfortunately, the online search tool does not include other Belfast cemeteries such as Balmoral Cemetery; Clifton Street Graveyard; Friar’s Bush Graveyard; Knock Burial Ground; Shankill Graveyard, although there are contact details on the Belfast City Burial Records webpage for assistance for these locations.

5. Calendars of Wills and Administrations 1858 to 1922 (National Archives of Ireland)

Up to 1917, the Calendars cover the whole of Ireland, but since 1918, they cover only the 26 counties of the Republic.

As you can see, the search bar is fairly straightforward.

I found two Samuel Johnstons for 1887. Although I couldn’t be 100% sure, the second did match the death date on the old, hand-drawn family tree in my grandfather’s possession. At this stage I have no idea who Daniel Johnston is – could he be a son or a brother? I can’t check on Irish Genealogy as that only includes deaths from 1891.

The Public Records Office of Northern Ireland (PRONI) also has a searchable database for will calendars. These include district probate registries of Armagh, Belfast and Londonderry for the years 1858 to 1965, with the ability to view copies of wills from 1858 to 1909. This was where I hit ancestral gold.

Again, I found the same Samuel Johnston, who died on 9 August 1887.

What I missed the first few times I searched the Will Calendars is the word ‘image’ – which takes me through to the actual, handwritten, will (although there isn’t always an image available). In it, Samuel happens to list his children plus some of his grandchildren, including (possibly) the Sarah Crozier listed in the 1901 census record at the beginning of this post. 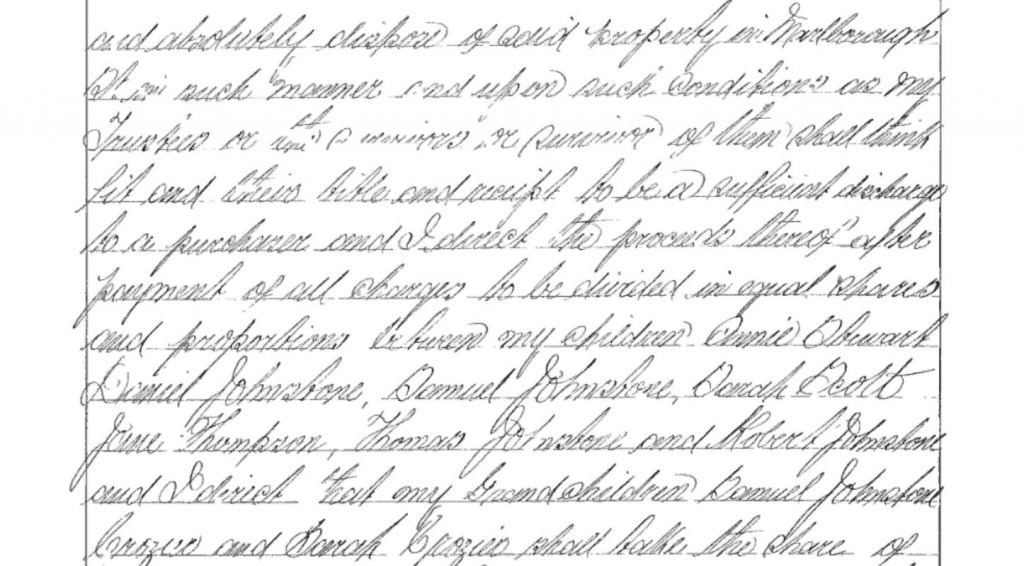 The Public Records Office of Northern Ireland (PRONI) has a searchable database of street directories from 1819 to 1900.

Lennon Wylie has also painstakingly transcribed a selection of street directories, and continues to add more to the website. These go back to 1805 and also include more recent directories up to 1960.

I am not as familiar with how to best utilise these street directories, but I’ll update you when I’ve had time to explore a little further.

Which of these online resources have you used to uncover your ancestors? Are there others you would highly recommend adding to the list?